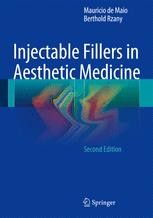 This book offers an excellent and comprehensive overview on the clinical use of fillers in aesthetic medicine that will assist both novice and advanced practitioners. Based on an evidence-based perspective, the book opens by describing the most common fillers, with information on their characteristics, efficacy and safety. The main part of the book then explains how to use fillers for the most frequent facial indications, such as the glabella, nasolabial folds, infraorbital hollow, nose, cheeks, lips and marionette lines. This new edition also includes chapters on extrafacial indications and treatment planning. All specific aesthetic procedures for the facial and extrafacial areas are described step by step, with the emphasis on a hands-on approach that highlights important do’s and don’ts. The book concludes with chapters on how to deal with adverse reactions and how to combine fillers with other aesthetic procedures, ranging from botulinum toxin A to plastic surgery.

Berthold Rzany is a dermatologist and clinical epidemiologist in private practice (RZANY & HUND) in Berlin, Germany. Between 2002 and 2011 he held the position of C3-Professor of Evidence-Based Medicine in Dermatology at the Department of Dermatology and Venerology at the Charité Universitätsmedizin. Dr. Rzany studied Medicine in Freiburg, Germany, Vienna, Austria, and Harvard Medical School, Boston, USA. He received his dermatological education at the Department of Dermatology at the University of Freiburg, Germany, and worked as a Consultant in Dermatology in Mannheim, Fakultät für Klinische Medizin, University of Heidelberg. He has a special interest in aesthetic medicine and tries to incorporate evidence-based medicine in aesthetic medicine. Dr. Rzany is the author of several leading publications in this field. He likes teaching and frequently gives hands-on workshops on botulinum toxin A and injectable fillers. He is also a consultant for various companies in respect of these substances.

Mauricio de Maio is a board-certified plastic surgeon from the Brazilian Society of Plastic Surgery and a member of the International Society of Aesthetic Plastic Surgery. Dr. de Maio graduated in Medicine from the Medical School of the University of Sao Paulo in 1990.  He specialized in Plastic Surgery in Brazil in 1996.  He obtained his Master’s Degree in Medicine in 1997 and Doctorate in Sciences in 2006 at the University of Sao Paulo, Brazil. He was a Clinical Assistant Professor in the Plastic Surgery Department of the University of Sao Paulo from 1996 to 2002. Dr. de Maio has authored scientific publications and articles, as well as published several books, including the following, co-authored with B. Rzany and published by Springer-Verlag:  Fillers in Aesthetic Medicine (2006), Botulinum Toxin in Aesthetic Medicine (2007), and The Male Patient in Aesthetic Medicine (2009). He is actively involved in research and teaches on international training courses in the United States, Europe, and Asia-Pacific.

“The editors of Injectable Fillers in Aesthetic Medicine (a plastic surgeon and a dermatologist)  have combined to create a second edition in which they set out to provide the reader with an overview of the most common biodegradable and nonbiodegradable fillers … . I congratulate the authors on producing a resource that by and large delivers on its promises. I recommend that clinicians involved with injectable fillers use this as both a thorough reference guide and a practical aid.” (Janek Januszkiewicz, Aesthetic Surgery Journal, Vol. 35, September, 2015)