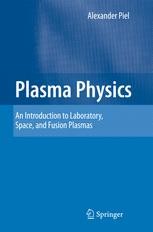 An Introduction to Laboratory, Space, and Fusion Plasmas

Plasma Physics gives a comprehensive introduction to the basic processes in plasmas and demonstrates that the same fundamental concepts describe cold gas-discharge plasmas, space plasmas, and hot fusion plasmas. Starting from particle drifts in magnetic fields, the principles of magnetic confinement fusion are explained and compared with laser fusion. Collective processes are discussed in terms of plasma waves and instabilities. The concepts of plasma description by magnetohydrodynamics, kinetic theory, and particle simulation are stepwise introduced. Space charge effects in sheath regions, double layers and plasma diodes are given the necessary attention. The new fundamental mechanisms of dusty plasmas are explored and integrated into the framework of conventional plasmas. The book concludes with a brief introduction to plasma discharges.

Written by an internationally renowned researcher in experimental plasma physics, the text keeps the mathematical apparatus simple and emphasizes the underlying concepts. The guidelines of plasma physics are illustrated by a host of practical examples including plasma diagnostics with different Langmuir probe methods or laser interferometry, ionospheric sounding, Faraday rotation, space thrusters, and diagnostics of dusty plasmas. Though primarily addressing students in plasma physics, the book is easily accessible for researchers in neighboring disciplines, such as space science, astrophysics, material science, applied physics, and electrical engineering.

The text is based on an introductory course to plasma physics and more specialized courses in plasma diagnostics, dusty plasmas, and plasma waves, which the author has taught at Kiel University for two decades. The pedagogical approach combines detailed explanations, a large number of illustrative figures, short summaries of the basics at the end of each chapter, and a selection of problems with detailed solutions. The book is primarily aimed at students meeting plasma physics for the first time after taking an advanced undergraduate course in electricity and magnetism. The book is structured to serve as a text for a two-semester introductory course in plasma physics at the advanced undergraduate or early graduate level. Some more advanced topics will help bridging the gap to plasma theory. In view of its practical advice in plasma discharges and diagnostics, Plasma Physics will become a useful resource on the bookshelf of PhD students and researchers.

“Plasma Physics offers a broad and modern introduction to the many aspects of plasma science … . A curious student or interested researcher could track down laboratory notes, older monographs, and obscure papers … . with an extensive list of more than 300 references and, in particular, its excellent overview of the various techniques to generate plasma in a laboratory, Plasma Physics is an excellent entree for students into this rapidly growing field. It’s also a useful reference for professional low-temperature plasma researchers.” (Michael Brown, Physics Today, June, 2011)