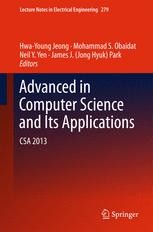 Advances in Computer Science and its Applications

These proceedings focus on various aspects of computer science and its applications, thus providing an opportunity for academic and industry professionals to discuss the latest issues and progress in this and related areas. The book includes theory and applications alike.

Professor Hwa Young Jeong received the MS degree in computer engineering in 1994 and the Ph.D in computer engineering in 2004 from the Kyung Hee University. Currently, he is a Professor in the Humanitas College at Kyung Hee University, Seoul, South Korea. He is a reviewer of MTAP (Multimedia Tools and Application) at Springer. And he is a member of the Standard Words Committee in Ministry of Information and Communication Republic of Korea. He has worked on the editorial board of the journal of the Korea Society for Internet Information from 2004. He was a system and software engineer in the Aju System Co., and CNA Research Inc., 1994 ~ 1999. In there, he had worked and programmed the GUI system of semiconductor testing machine which was called IC Test Handler. He was assistant professor, Dept of E-Business of Yewon Art University in 2000~2005. He is Director of General Affairs and publication chair of FTRA. Also he is an editor for JoC(Journal of Convergence), Human-centric Computing and Information Sciences by Springer and Journal of Convergence Information Technology. His research interests include design of system software, software and application with security, manufacturing system software, e/u-learning system.

Professor Mohammad S. Obaidat is an internationally well-known academic/researcher/ scientist. He received his Ph.D. and M. S. degrees in Computer Engineering with a minor in Computer Science from The Ohio State University, Columbus, Ohio, USA. Dr. Obaidat is currently a full Professor of Computer Science and Software Engineering at Monmouth University, NJ, USA. Among his previous positions are Advisor to the President of Philadelphia University for Research, Development and IT, and Chair of the Department of Computer Science, and Director of the Graduate Program at Monmouth University and a faculty member at the City University of New York. He has received extensive research funding and has published over Five Hundred and Sixty (560) refereed technical articles in scholarly international journals and proceedings of international conferences. Prof. Obaidat is the author/co-author of over 15 books including APPLIED SYSTEM SIMULATION: Methodologies and Applications, (Springer 2003) among others. Professor Obaidat has served as a consultant for several corporations and organizations worldwide. Dr. Obaidat is the Editor- in- Chief of three scholarly journals. He is also Editor, and Advisory Editor of numerous international journals and transaction. He also served as editor or advisory editor of numerous other  transactions and journals. Obaidat has served as the steering committee chair, advisory Committee Chair and program chair of numerous international conferences. He has served as the General Chair of many conferences. He is the founder of the International Symposium on Performance Evaluation of Computer and Telecommunication Systems, SPECTS and has served as the General Chair of SPECTS since its inception. He also has served on the program and organizing committees of numerous international conferences. Professor Obaidat is the founder of IEEE International Conference on Computer, Information and Telecommunication Systems( CITS) and he is currently General Chair of CITS 2012.

Professor Neil Y. Yen received his doctorates in Human Sciences at Waseda University, Japan, and in Engineering at Tamkang University, Taiwan in 2012. His doctorate in Waseda University was funded by the JSPS (Japan Society for the Promotion of Science) under RONPAKU program. He joins the University of Aizu as an associate professor since April 2012. He has been engaged in the interdisciplinary research domains including computer science and engineering, information management and human informatics. His research interests are primarily in 1) computational intelligence and its applications; 2) pervasive / awareness computing; and 3) social network analysis. Dr. Yen has been actively involved in the research community by serving as guest editors of 9 international journals, as associate editor of 5 international journals, as reviewer for technical journals/transactions, and as organizer/chair of IEEE/ACM conferences/workshops. He is now a member of IEEE Computer Society, IEEE System, Man, and Cybernetics Society, and technical committee of awareness computing (IEEE SMCS).

Professor James J. (Jong Hyuk) Park received his Ph.D. degree in Graduate School of Information Security from Korea University, Korea. From December, 2002 to July, 2007, Dr. Park had been a research scientist of R&D Institute, Hanwha S&C Co., Ltd., Korea. From September, 2007 to August, 2009, He had been a professor at the Department of Computer Science and Engineering, Kyungnam University, Korea. He is now a professor at the Department of Computer Science and Engineering, Seoul National University of Science and Technology (SeoulTech), Korea. Dr. Park has published about 100 research papers in international journals and conferences. He has been serving as chairs, program committee, or organizing committee chair for many international conferences and workshops. He is a president of the Future Technology Research Association International (FTRA) and Korea Information Technology Convergence Society (KITCS). He is editor-in-chief of Human-centric Computing and Information Sciences(HCIS) by Springer, International Journal of Information Technology, Communications and Convergence (IJITCC) by InderScience, and Journal of Convergence (JoC) by FTRA Publishing.