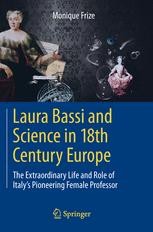 The Extraordinary Life and Role of Italy's Pioneering Female Professor

This book presents the extraordinary story of a Bolognese woman of the settecento. Laura Maria Caterina Bassi (1711-1778) defended 49 Theses at the University of Bologna on April 17, 1732 and was awarded a doctoral degree on May 12 of the same year. Three weeks before her defense, she was made a member of the Academy of Sciences in Bologna. On June 27 she defended 12 additional Theses. Several of the 61 Theses were on physics and other science topics. Laura was drawn by the philosophy of Newton at a time when most scientists in Europe were still focused on Descartes and Galen. This last set of Theses was to encourage the University of Bologna to provide a lectureship to Laura, which they did on October 29, 1732. Although quite famous in her day, Laura Bassi is unfortunately not remembered much today. </P>
<BR>
This book presents Bassi within the context of the century when she lived and worked, an era where no women could attend university anywhere in the world, and even less become a professor or a member of an academy. Laura was appointed to the Chair of experimental physics in 1776 until her death. Her story is an amazing one. Laura was a mother, a wife and a good scientist for over 30 years. She made the transition from the old science to the new very early on in her career. Her work was centered on real problems that the City of Bologna needed to solve. It was an exciting time of discovery and she was at the edge of it all the way.

Dr. Frize graduated with a Bachelor of Applied Science (Electrical Engineering), received an Athlone Fellowship and completed a Master's in Philosophy in Electrical Engineering (Engineering in Medicine) at Imperial College of Science and Technology in London (UK), a Master's of Business Administration at the Université de Moncton (New Brunswick), and a doctorate from Erasmus Universiteit in Rotterdam, The Netherlands.

In 1992, Monique Frize received an Honorary Doctorate from the University of Ottawa (DU); in June 1993, a Ryerson Fellowship; in 1994, an Honourary Doctorate in Science (DSc) at York University; in 1995, an Honourary Doctorate in Engineering at Lakehead (DEng). She was inducted as a Fellow of the Canadian Academy of Engineering in 1992 and as Officer of the Order of Canada in October 1993. In 1995, Dr. Frize received the Second Historical Professional Achievement Award (jointly with Dr. Michael Shaffer) from the American College of Clinical Engineers, for her paper: "Clinical Engineering in today's hospital: Perspectives of the Administrator and the Clinical Engineer". In September 1996, Dr. Frize received the 6th Annual Meritas-Tabaret Award for career achievement from the Alumni Association of the University of Ottawa and the Advocacy Award presented by WITT (Women in Trades and Technology) in May 1997. Born in Montreal, Canada, Dr. Frize's mother tongue is French, and she is fluently bilingual. She is married to Peter Frize and they have a son, Patrick Nicholas.

For more information please click on the link below.
http://www.site.uottawa.ca/~frize/