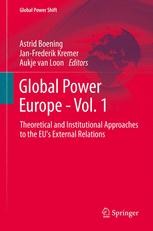 Theoretical and Institutional Approaches to the EU's External Relations

This two-volume project provides a multi-sectoral perspective over the EU's external projections from traditional as well as critical theoretical and institutional perspectives, and is supported by numerous case studies covering the whole extent of the EU’s external relations. The aim is to strive to present new approaches as well as detailed background studies in analyzing the EU as a global actor.

Volume 1: The first volume “Theoretical and Institutional Approaches to the EU’s External Relations” addresses the EU's overall external post-Lisbon Treaty presence both globally and regionally (e.g. in its "neighborhood"), with a special emphasis on the EU’s institutional framework. It also offers fresh and innovative theoretical approaches to understanding the EU’s international position. -   With a preface by Alvaro de Vasoncelos (former Director European Union Institute for Security Studies)

Volume 2: The second volume “Policies, Actions and Influence of the EU’s External Relations”, examines in both quantitative and qualitative contributions the EU's international efficacy from a political, economic and social perspective based on a plethora of its engagements.

Astrid Boening, PhD/University of Miami, and MA/Florida International University, in International Relations, with additional studies in international business at George Washington University John Cabot campus in Rome, in Latin American economics and marketing in Costa Rica, Chile and Brazil through Georgetown University, and a field course at the UN. Currently Associate Director of the Miami-Florida European Union Center of Excellence, and adjunct faculty in the International Studies Dept. at the University of Miami. Numerous publications on the Euro-Mediterranean from a regional integration and security perspective.

Jan-Frederik Kremer is Lecturer and Research Associate at the Center for Global Studies, University of Bonn. He studied Political Science, Social Science, Modern and Ancient History and Philosophy at Ruhr-University Bochum, and is a PhD Candidate in the PhD program “International Development Studies” (Economics) at the Institute of Development Research and Development Policy (IEE) and member of the DFG funded “Research School”. Jan-Frederik was awarded several scholarships. He is (co)-author and (co-)editor of a number of publications, like “Power in the 21st Century – International Security and International Political Economy in a Changing World”, “Global Power Europe, Volume 1 and 2” and “Towards a New Understanding of Structural Power”. Jan-Frederik presents his work frequently at major international conferences (ISA, BISA, ECPR, DGPW).

"This two-volume project is bound to become a main reference point for anyone interested in the EU’s role in international politics. It combines a diverse set of theoretical and geographical lenses with an overview of different policy areas that is unique in its comprehensiveness. The contributions highlight the main challenge ahead of the EU: to maintain its status as a novel actor in international society while at the same time bolstering its influence." - Thomas Diez, University of Tübingen

“This is the most comprehensive assessment of the EU's role in the world to date. The 32 chapters cover the whole breadth of the EU's external relations, ranging from democracy promotion to trade policy and climate change negotiations. The volumes will be a highly valuable resource for all students and scholars interested in the EU's global role.” - Andreas Dür, University of Salzburg

“The EU as a global actor has become the focus of an increasingly intense academic and policy debate. At a time when many question the coherence, effectiveness and visibility of the Union’s role on the global stage, this comprehensive two-volume study provides clear answers to the institutional, theoretical and public-policy dimensions of that role. These essays contribute in significant ways to enhancing our understanding not simply of the way in which the EU conducts itself internationally, but above all of the scale, complexity and ubiquity of its diplomatic and political presence.” - Jolyon Howorth, Yale University

“The two volumes of Global Power Europe make an outstanding contribution to EU studies by engaging both in theoretical debates and in in-depth empirical analyses. The EU’s distinctive and innovative role in world politics is superbly examined in a wide range of policy areas. Thus, the two volumes will serve as important standard reference books for students and scholars alike.” - Stefan A. Schirm, Ruhr-University Bochum

“The European Union is now one of the most complex and active global powers, and its reach extends further than many had ever imagined possible. The "Global Power Europe" collection examines the totality of the EU's global "actorness" and influence, using a variety of theoretical insights and sophisticated case studies of EU civilian, economic, security, and ethical policies.  It should become a major reference work for EU scholars and policy-makers.“ - Michael E. Smith, University of Aberdeen