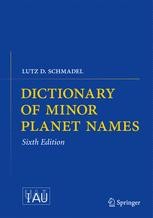 The quantity of numbered minor planets has now well exceeded a quarter million. The new sixth edition of the Dictionary of Minor Planet Names, which is the IAU’s official reference work for the field, now covers more than 17,000 named minor planets. In addition to being of practical value for identification purposes, the Dictionary of Minor Planet Names provides authoritative information on the basis of the rich and colorful variety of ingenious names, from heavenly goddesses to artists, from scientists to Nobel laureates, from historical or political figures to ordinary women and men, from mountains to buildings, as well as a variety of compound terms and curiosities.

This sixth edition of the Dictionary of Minor Planet Names has grown by more than 7,000 entries compared to the fifth edition and by more than 2,000 compared to the fifth edition, including its two addenda published in 2006 and 2009. In addition, there are many  corrections, revisions and updates to the entries published in earlier editions. This work is an abundant source of information for anyone interested in minor planets and who enjoys reading about the people and things minor planets commemorate.

Dr. Lutz D. Schmadel, astronomer and computer of orbits and ephemerides of minor planets at Astronomisches Rechen-Institut, Heidelberg, has discovered more than 230 minor planets and has done great service to the community by preparing the Dictionary of Minor Planet Names (now in its 6th edition) on behalf of Commision 20 of the International Astronomical Union (IAU). As member of the IAU he is affiliated to several divisions and commisions including Division III Commission 20 (Positions & Motions of Minor Planets, Comets & Satellites), Commission 5 (Documentation & Astronomical Data), Commission 41 (History of Astronomy), as well as the Committee on Small Bodies Nomenclature (CSBN)".

“The new sixth edition of Schmadel’s ‘Dictionary of Minor Planet Names’, has now been expanded to 16,683 named minor planets, and is published for the first time in 2 volumes with 1452 pages. … Highly recommendable to libraries, astronomers and amateur astronomers alike!” (Olaf Ninnemann, zbMATH 1317.85001, 2015)

“This is by any standards a quite excellent reference book: comprehensive, accurate, consistently edited and elegantly designed and produced. While it is obviously geared to any or all members of the astronomical community (including libraries serving them) it also has a much wider fascination for all those of us fascinated by names themselves and by the processes of naming objects.” (Stuart James, Reference Reviews, Vol. 28 (3), 2014)

“German astronomer and historian Schmadel (Heidelberg Univ.) has published a sixth edition … of this annotated compilation of the named minor planets, with more than 7,000 entries added since the last edition. … Following the planet’s name is a short descriptive history of whom the planet was named for. … Although this book is intended for special users, its organization and annotations can give budding scientists a glimpse into the history of astronomy. Summing Up: Recommended. Graduate students through professionals/practitioners.” (R. J. Havlik, Choice, Vol. 50 (7), March, 2013)