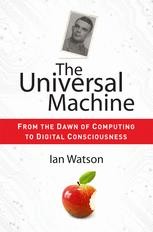 From the Dawn of Computing to Digital Consciousness

The computer unlike other inventions is universal; you can use a computer for many tasks: writing, composing music, designing buildings, creating movies, inhabiting virtual worlds, communicating...
This popular science history isn't just about technology but introduces the pioneers: Babbage, Turing, Apple's Wozniak and Jobs, Bill Gates, Tim Berners-Lee, Mark Zuckerberg. This story is about people and the changes computers have caused. In the future ubiquitous computing, AI, quantum and molecular computing could even make us immortal. The computer has been a radical invention. In less than a single human life computers are transforming economies and societies like no human invention before.

Ian Watson is an Associate Professor of Computer Science at the University of Auckland, New Zealand. He has published two textbooks and over one hundred scientific papers, on various aspects of artificial intelligence and is a regular speaker at computer science conferences worldwide. He also makes regular contributions to the popular NZ computer magazine NetGuide.

“The Universal Machine follows the development of computers, as it says in the subtitle, ‘From the dawn of computing to digital consciousness.’ … On the whole, the historical content was at just the right level – enough to keep you interested without getting overwhelmed. … The Universal Machine is a great way to get a real feel for where the machines that are at the centre of so many of our lives came from.” (Brain Clegg, Popular Science, June, 2012)

“An interesting and reasonably priced book, which concentrates on some of the people (from Ada to Zuse), companies (from Apple to Xerox) and machines (from the Acorn to the Z1) that have contributed to computer development. … The book contains plenty of references … as well as a ‘Further Reading’ section. … it appeals to a wide audience, and at over 350 pages there is something in here for anyone who has the vaguest interest in a history of computers including the internet … .” (Mike Rees, BCS – The Chartered Institute for IT, August, 2012)

“This book starts with Charles Babbage and ends with the US military’s latest Reaper drones, tracing a fascinating history of the development of computers and computer science from the Regency and Victorian eras to the present day. … it’s accessible and readable even to non-geeky types, written as it is in an easy-going and engaging style. … it’s also an enjoyable read for hard-core techies: you’ll almost certainly keep running into computers and engineers you haven’t heard of before.” (Paul Ducklin, Naked Security, August, 2012)

“Watson … traces the history of computing from Babbage’s difference engine to the monolithic computers of the 1950s, to PCs and Macs, to mobile technology. … The work is heavily illustrated with … photographs of people, machines, and simple diagrams. … structured as an encyclopedia with brief essays of up to 2,000 words on topics arranged thematically into 14 chapters. … provides an easily accessible big picture of computing history that is both comprehensive and introductory. Summing Up: Highly recommended. Lower-division undergraduates and general readers.” (S. M. Frey, Choice, Vol. 50 (7), March, 2013)