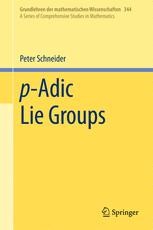 Manifolds over complete nonarchimedean fields together with notions like tangent spaces and vector fields form a convenient geometric language to express the basic formalism of p-adic analysis. The volume starts with a self-contained and detailed introduction to this language. This includes the discussion of spaces of locally analytic functions as topological vector spaces, important for applications in representation theory. The author then sets up the analytic foundations of the theory of p-adic Lie groups and develops the relation between p-adic Lie groups and their Lie algebras. The second part of the book contains, for the first time in a textbook, a detailed exposition of Lazard's algebraic approach to compact p-adic Lie groups, via his notion of a p-valuation, together with its application to the structure of completed group rings.

“The book is divided into two parts … . The author’s style of writing is elegant … . this is a demanding book, but a rewarding one … . any person who intends to work in this area will want to have it close at hand.” (Mark Hunacek, The Mathematical Gazette, Vol. 98 (541), March, 2014)

“The notion of a p-adic Lie group has been around for a while, but they have recently become more prominent in number theory and representation theory. … Schneider’s Grundlehren volume is an attempt to fill that gap by giving a systematic treatment of the subject. … this is a book to be welcomed and studied carefully by anyone who wants to learn about p-adic Lie theory.” (Fernando Q. Gouvêa, The Mathematical Association of America, August, 2011)

“The book thoroughly discusses the analytic aspects of p-adic manifolds and p-adic lie groups. … this clearly written book by Schneider will be very useful … to all those interested learning the basic theory of p-adic groups or about the completed group ring of a p-adic group with number theoretical applications in mind.” (Bala Sury, Zentralblatt MATH, Vol. 1223, 2011)