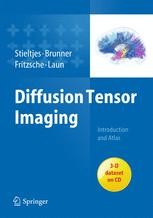 Diffusion Tensor Imaging (DTI) is a variation of diffusion-weighed imaging. Particularly in the neurosciences, this technique has gained tremendous momentum in the past decade, both from a technical point of view as well as in its applications. DTI is mainly used in neurological diagnosis and psychiatric and neurologic research, e.g. in order to locate brain tumors and depict their invasivity.

DTI offers a unique in-vivo insight into the three-dimensional structure of the human central nervous system. While easy interpretation and evaluation is often hampered by the complexity of both the technique and neuroanatomy, this atlas helps you recognize every one of the important structures rapidly and unambiguously.

In the introduction, this atlas provides a concise outline of the evolution of diffusion imaging and describes its potential applications. In the core part of the atlas, the neuroanatomically important structures are clearly labeled both on DTI-derived color maps and conventional MRI. Complex fiber architecture is illustrated schematically and described concisely in textboxes directly on the relevant page. In the final part of the atlas, a straightforward, step-by-step approach for the three-dimensional reconstruction of the most prominent fiber structures is given, and potential pitfalls are indicated.

The atlas aims at neuroscientists, neuroanatomists, neurologists, psychiatrists, clinical psychologists, physicists, and computer scientists. For advanced users, the atlas may serve as a reference work, while students and scientists are thoroughly introduced into DTI.

The editors have been working together as a team at the German cancer research center “DKFZ” in Heidelberg, Germany for a considerable time. Bram Stieltjes has been involved in the early development of DTI and in numerous clinical applications, e.g. in child psychiatry in cooperation with Romuald M. Brunner of Heidelberg University. Frederik Laun is an expert on the physical background of diffusion imaging. Klaus Fritzsche is currently working on software development for visualization and quantification of diffusion data.