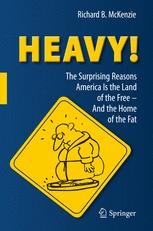 America’s emerging “fat war” threatens to pit a shrinking population of trim Americans against an expanding population of heavy Americans in raging policy debates over “fat taxes” and “fat bans.”  These “fat policies” would be designed to constrain what people eat and drink – and theoretically crimp the growth in Americans’ waistlines and in the country’s healthcare costs.

Richard McKenzie’s HEAVY! The Surprising Reasons America Is the Land of the Free—And the Home of the Fat offers new insight into the economic causes and consequences of America's dramatic weight gain over the past half century.  It also uncovers the follies of seeking to remedy the country’s weight problems with government intrusions into people’s excess eating, arguing that controlling people’s eating habits is fundamentally different from controlling people’s smoking habits.

In no small way – no, in a very BIG way – America is the “home of the fat” because it has been for so long the “land of the free.”  Americans’ economic, if not political, freedoms, however, will come under siege as well-meaning groups of “anti-fat warriors” seek to impose their dietary, health, and healthcare values on everyone else.

HEAVY! details the unheralded consequences of the country's weight gain, which include greater fuel consumption and emissions of greenhouse gases, reduced fuel efficiency of cars and planes, growth in health insurance costs and fewer insured Americans, reductions in the wages of heavy people, and required reinforcement of rescue equipment and hospital operating tables.

Richard McKenzie is the Walter B. Gerken Professor of Economics and Management in the Merage School of Business at the University of California, Irvine. He has written over thirty books, several of which have been written for general audiences, including The Home: A Memoir of Growing Up in an Orphanage (Basic Books 1996 and Dickens Press 2006), Getting Rich in America: Eight Simple Rules for Building a Fortune and a Satisfying Life (Harper 1998) and Why Popcorn Costs So Much at the Movies, And Other Pricing Puzzles (Springer 2008). His most recent strictly academic books include Predictably Rational? In Search of Defenses of Rational Behavior in Economics (Springer 2010) and In Defense of Monopoly: How Market Power Fosters creative Production (with Dwight Lee, University of Michigan Press, 2008). He is also co-author of a widely used textbook, Microeconomics for MBAs: The Economic Way of Thinking for Managers. His book with Gordon Tullock, The New World of Economics, which has been used over the years in most of the country’s leading colleges and universities and has been translated into several languages, will be published in a revived sixth edition in 2011. Professor McKenzie has written any number of public policy commentaries carried in national and major regional newspapers, including The Wall Street Journal, The New York Times, The Washington Post, USA Today, and Reader’s Digest. Finally, he has produced a PBS-syndicated documentary Homecoming: The Forgotten World of America’s Orphanages