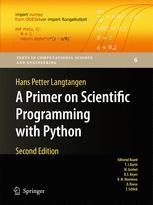 A Primer on Scientific Programming with Python

The book serves as a first introduction to computer programming of scientific applications, using the high-level Python language. The exposition is example- and problem-oriented, where the applications are taken from mathematics, numerical calculus, statistics, physics, biology, and finance. The book teaches "Matlab-style" and procedural programming as well as object-oriented programming. High school mathematics is a required background, and it is advantageous to study classical and numerical one-variable calculus in parallel with reading this book. Besides learning how to program computers, the reader will also learn how to solve mathematical problems, arising in various branches of science and engineering, with the aid of numerical methods and programming. By blending programming, mathematics and scientific applications, the book lays a solid foundation for practicing computational science.

Hans Petter Langtangen is a professor of computer science at the University of Oslo. He has formely been a professor of mechanics and is now the director of a Norwegian Center of Excellence: "Center for Biomedical Computing", at Simula Research Laboratory. Langtangen has published over 100 scientific publications and written several books, including papers and a book on Python's potential for scientific computing. He has also developed open source and commercial software systems for computational sciences.

“This book is an introduction to computer programming using the Python programming language. It focuses on numerical methods as the context for examples, exercises, and assignments. … Langtangen … does an excellent job of introducing programming as a set of skills in problem solving. He guides the reader into thinking properly about producing program logic and data structures for modeling real-world problems using objects and functions and embracing the object-oriented paradigm. … Summing Up: Highly recommended. Upper-division undergraduates through professionals; general readers.” (F. H. Wild III, Choice, Vol. 47 (8), April, 2010)

“It is an authoritative and almost monumental work that covers most aspects of the Python language and its numerical modules. It definitely has a prominent place on my bookshelf. … The text is well written … . In summary, this is the book (the only book) to have if you are an aspiring Python programmer of scientific applications.” (Jaan Kiusalaas, SIAM Review, Vol. 52 (3), September, 2010)

“The book’s title reflects its content accurately, the content is substantively scientific and the book is a very good programming book. … This excellent book is quite rich mathematically, numerical methods, differential equations, treatments of shape, and a variety of exercises and projects are included. It will also impart a deep knowledge of python, one of today’s most useful languages. I have learned a great deal from this book and recommend it highly.” (George Hacken, ACM Computing Reviews, September, 2010)

“This book goes through Python in particular, and programming in general, via tasks that scientists will likely perform. … If you want to learn Python … this book is for you. … this is an excellent book for the experienced programmer who wants to learn a new language and become a better programmer. It contains valuable information for students new to scientific computing, and would be the perfect bridge between an introduction to programming and an advanced course on numerical methods or computational science.” (Alex Small, Computing in Science & Engineering, Vol. 14 (2), March/April, 2012)

“The aim of the book is to teach computer programming using examples from mathematics and natural sciences. … The clear concept of this book goes far beyond the mere listing of the functionalities of the programming language. Because of its application-oriented approach, the reader is teached to think as a programmer.” (Stefan Meyer, Zentralblatt MATH, Vol. 1222, 2011)