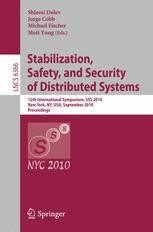 The papers in this volume were presented at the 12th International Sym- sium on Stabilization, Safety, and Security of Distributed Systems (SSS), held September 20–22, 2010 at Columbia University, NYC, USA. The SSS symposium is an international forum for researchersand practiti- ers in the design and development of distributed systems with self-* properties: (theclassical)self-stabilizing,self-con?guring,self-organizing,self-managing,se- repairing,self-healing,self-optimizing,self-adaptive,andself-protecting. Research in distributed systems is now at a crucial point in its evolution, marked by the importance of dynamic systems such as peer-to-peer networks, large-scale wi- lesssensornetworks,mobileadhocnetworks,cloudcomputing,roboticnetworks, etc. Moreover, new applications such as grid and web services, banking and- commerce, e-health and robotics, aerospaceand avionics, automotive, industrial process control, etc. , have joined the traditional applications of distributed s- tems. SSS started as the Workshop on Self-Stabilizing Systems (WSS), the ?rst two of which were held in Austin in 1989 and in Las Vegas in 1995. Starting in 1995, the workshop began to be held biennially; it was held in Santa Barbara (1997), Austin (1999), and Lisbon (2001). As interest grew and the community expanded, the title of the forum was changed in 2003 to the Symposium on Self- Stabilizing Systems (SSS). SSS was organized in San Francisco in 2003 and in Barcelona in 2005. As SSS broadened its scope and attracted researchers from other communities, a couple of changes were made in 2006. It became an - nual event, and the name of the conference was changed to the International Symposium on Stabilization, Safety, and Security of Distributed Systems (SSS).