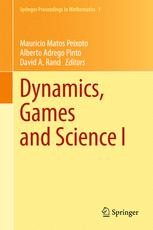 Dynamics, Games and Science I

Dynamics, Games and Science I and II are a selection of surveys and research articles written by leading researchers in mathematics. The majority of the contributions are on dynamical systems and game theory, focusing either on fundamental and theoretical developments or on applications to modeling in biology, ecomonics, engineering, finances and psychology.

The papers are based on talks given at the International Conference DYNA 2008, held in honor of Mauricio Peixoto and David Rand at the University of Braga, Portugal, on September 8-12, 2008.

The aim of these volumes is to present cutting-edge research in these areas to encourage graduate students and researchers in mathematics and other fields to develop them further.

Maurício Peixoto, in1953, together with Leopoldo Nachbin, helped to found IMPA (Instituto Nacional de Matemática Pura e Aplicada), to which has been associated ever since and is a Emeritus Researcher at the present; Peixoto’s Theorem.is a key stone in mathematics and its extensions form a central area of research in dynamical systems.

David Rand is Professor of Mathematics and is the co-director of the Systems Biology Centre, at University of Warwick. David Rand has made lasting contributions to pure and applied dynamical systems, and also to game theory, economics, theoretical physics, fluid dynamics, ecology and epidemiology, immunology and circadian rhythms. Rand published a dynamical game based on Cournot duopoly and showed that under rather natural conditions this game would have chaotic trajectories. His most recent work is on the interface between mathematics and systems biology. Awards and Honors 1986 Whitehead Prize of the London Mathematical Society. 1988 Wolfson Research Award. 1988 Founding editor of Nonlinearity 2004 Fellow, Institute of Mathematics and Its Applications (by invitation) 2005 Britten Lecturer. McMaster University 2006 EPSRC Senior Research Fellowship Alberto A. Pinto is Professor of Mathematics at University of Porto and, previously, was Professor of Mathematics at University of Minho. Edson de Faria, Welington de Melo and Alberto A. Pinto have developed a theory in the global hyperbolicity of renormalization for smooth unimodal mappings that is published in Annals of Mathematics Alberto A. Pinto, David Rand and Dennis Sullivan have developed an extensive theory characterizing the flexibility and rigidity of one and two dimensional hyperbolic dynamical systems and constructed Teichmuller spaces for them, in particular, for their conjugacy classes. This work has appeared in a number of papers and has been collected into a monograph that was published by Springer in 2008. Aragão de Carvalho, Diogo Pinheiro, Alberto A. Pinto and Maurício Peixoto are working in the semiclassical quantization of the pendulum equation using renormalization methods. Awards and Honors 1984- Augusto Martins prize at University of Porto 2007-Espinho town’s golden medal