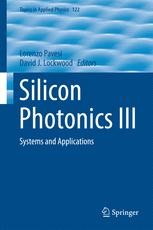 This book is volume III of a series of books on silicon photonics. It reports on the development of fully integrated systems where many different photonics component are integrated together to build complex circuits. This is the demonstration of the fully potentiality of silicon photonics. It contains a number of chapters written by engineers and scientists of the main companies, research centers and universities active in the field. It can be of use for all those persons interested to know the potentialities and the recent applications of silicon photonics both in microelectronics, telecommunication and consumer electronics market.

David J. Lockwood earned BSc (1964), MSc (1966), and PhD (1969) degrees in physics at the University of Canterbury and was awarded a DSc in 2000. His doctoral research work was on inelastic light (Raman) scattering from insulators under Professor Alister G. McLellan. He spent 1970-71 as a post-doctoral fellow in physical chemistry with Professor Donald E. Irish at the University of Waterloo working on the vibrational spectroscopy of solvated cations. Dr. Lockwood then moved to Edinburgh University as a research fellow in the group of Professor William Cochran and spent six years there researching the dynamical properties of structural phase transitions and antiferromagnets. As a result of these studies he was awarded a DSc (1978) degree in physics by Edinburgh University. In 1978, Dr. Lockwood joined the Division of Physics of the National Research Council (NRC) of Canada, where he is now a Principal Research Officer in the Institute for Microstructural Sciences.

At NRC, Dr. Lockwood continued his investigations of the electronic and magnetic excitations of antiferromagnets culminating in the classic book on light scattering in magnetic solids co-authored with Professor Michael G. Cottam. Since the mid-1980s he has researched the optical properties of semiconductor heterostructures, superlattices, and more recently, nanostructures. His seminal work on silicon nanostructures resulted in the definitive and widely cited observation of quantum-confined light emission in silicon and also of self-organized growth in superlattice structures. Dr. Lockwood has now published over 550 papers and 22 books on these topics and holds 7 patents.

Dr. Lockwood has been extremely active in the promotion of science internationally through his service in recent years on more than 40 international and national committees including work within NATO, IUPAP, and the American Physical Society, where he was chair of the Forum on International Physics. He is an Editor of Solid State Communications and a member of the Editorial Boards of Physica E, Low Temperature Physics, The Open Condensed Matter Physics Journal, and Physics in Canada and is also Founding Editor for the Book Series on Nanostructure Science and Technology. Within the Electrochemical Society (ECS), he has co-organized or chaired a number of very successful international symposia on pits and pores, quantum confinement, and advanced luminescent materials and has served on the Board of Directors of ECS as well as chair of the Luminescence and Display Materials Division. He has served on the executive of the Canadian Association of Physicists as director of international affairs and also as treasurer, and of the Royal Society of Canada as treasurer.

Dr. Lockwood is a Fellow of the Royal Society of Canada, the American Physical Society, and the Electrochemical Society, and is a member of the Materials Research Society, ASTM International, the Institute of Nanotechnology, and the Canadian Association of Physicists. In 2005 he was awarded the Brockhouse Medal of the Canadian Association of Physicists for outstanding achievement in condensed matter and materials physics and the Tory Medal of the Royal Society of Canada for outstanding research in any branch of astronomy, chemistry, mathematics, physics, or an allied science.

Lorenzo Pavesi is Professor of Experimental Physics at the University of Trento (Italy). Born the 21st of November 1961, he received his PhD in Physics in 1990 at the Ecole Polytechnique Federale of Lausanne (Switzerland). In 1990 he became Assistant Professor, an Associate Professor in 1999 and Full Professor in 2002 at the University of Trento. He leads the nanoscience laboratory (25 people), teaches several classes at the Science Faculty of the University of Trento, and is dean of the PhD School in Physics. He founded the research activity in semiconductor optoelectronics at the University of Trento and started several laboratories of photonics, growth and advanced treatment of materials. He is in charge of the professional master in NEMS-MEMS, coorganized between University and FBK. He has directed more than 15 PhD students and more than 20 Master thesis students. His research activity concerned the optical properties of semiconductors. During the last years, he concentrated on Silicon based photonics where he looks for the convergence between photonics and electronics by using silicon nanostructures. He is interested in active photonics devices which can be integrated in silicon by using classical waveguides or novel waveguides such as those based on dynamical photonic crystals. His interests encompass also optical sensors or biosensors and solar cells. In silicon photonics, he is one of the worldwide recognized experts, he organized several international conferences, workshops and schools and is a frequently invited speaker. He manages several research projects, both national and international. He advises EC on photonics and is a frequently invited reviewer, monitor or referee for photonics projects by several grant agencies. He is an author or co-author of more than 250 papers, author of several reviews, editor of more than 10 books, author of 2 books and holds six patents. He is in the editorial board of Research Letters in Physics and he was in the editorial board of Journal of Nanoscience and Nanotechnologies, in the directive council of the LENS (Florence), in the Board of Delegates of E-MRS. He holds an H-number of 33 according to the web of science