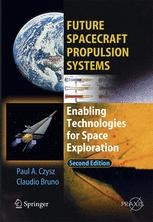 This third edition of Future Spacecraft Propulsion Systems and Integration – Enabling Technologies for Space Exploration, has been updated and expanded. The major addition addresses the multi-disciplinary integration between the spectrum of hypersonic vehicles to reach Earth orbit and that of their propulsion systems. A best-practice sizing approach is presented to define the solution spaces and facilitate the correct design of these integrated flight vehicles to mission. This pragmatic approach is the essential capability sought after by design teams, technology forecasters and strategic planners alike, and includes lesson learned and space launchers as examples from the past.

Among novel systems, the chapter on future combined engines includes now description and performance of pulsed detonation engines. All aspects of space flight discussed in the first two editions have been updated and augmented to account for the many changes in technology, policy and space objectives following the demise of the US Shuttle and the appearance of private space companies.

Accordingly, the chapters dealing with near-Earth, interplanetary, galactic and future breakthrough propulsion have been expanded to include new applications, such as nuclear magnetic pulses, recent concept powered by inertial fusion, and new issues as, for instance, space radiation, a major obstacle to space exploration and commercialization in the years to come.

This book can be useful to graduate students and teachers, as well as industrial organizations and planners.

“Book is interesting in both the technical details and overviews but also in the theoretical parts where it for example explores Special Relativity and the nature of time … . an excellent and very useful book when you're interested in technology and physics, or when you want to find out more about some of the ideas that modern science fiction books and movies use. It's also a great first longer introduction into some specific propulsion methods and proposed spacecraft designs.” (AstroMadness.com, October, 2016)

“Authors discuss the main characteristics, advantages, and disadvantages of different spacecraft-propulsion systems, ranging from launchers designed to reach Earth orbit to deep-space probes and interstellar explorers. … describes in detail the shortcomings of current systems and the requirement to develop new, low-cost launch vehicles and space tugs that are capable of conducting sustained operations in low Earth orbit. … Aimed at a technically literate readership, the book is particularly thorough in dealing with the potential and drawbacks associated with various types of nuclear propulsion.” (Peter Bond, The Observatory, Vol. 130 (1214), June, 2010)

“It discusses concepts and designs for the propulsion of future spacecraft which are capable of exploring the solar system and to travel beyond. … The book is generally well-written … . It is well-referenced, includes many figures (and a colour section) and is logically structured in nine sections and two appendices. … The typical reader of this book is an engineer working on the field or related topics … . a valuable reference for experts on the field and those who want to become one.” (Manuel Vogei, Contemporary Physics, Vol. 51 (6), 2010)