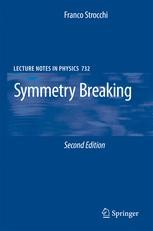 This new edition of Prof. Strocchi's well received primer on rigorous aspects of symmetry breaking presents a more detailed and thorough discussion of the mechanism of symmetry breaking in classical field theory in relation with the Noether theorem. Moreover, the link between symmetry breaking without massless Goldstone bosons in Coulomb systems and in gauge theories is made more explicit in terms of the delocalized Coulomb dynamics. Furthermore, the chapter on the Higgs mechanism has been significantly expanded with a non-perturbative treatment of the Higgs phenomenon, at the basis of the standard model of particle physics, in the local and in the Coulomb gauges. Last but not least, a subject index has been added and a number of misprints have been corrected. From the reviews of the first edition:

The notion of spontaneous symmetry breaking has proven extremely valuable, the problem is that most derivations are perturbative and heuristic. Yet mathematically precise versions do exist, but are not widely known. It is precisely the aim of his book to correct this unbalance. - It is remarkable to see how much material can actually be presented in a rigorous way (incidentally, many of the results presented are due to Strocchi himself), yet this is largely ignored, the original heuristic derivations being, as a rule, more popular. - At each step he strongly emphasizes the physical meaning and motivation of the various notions introduced [...] a book that fills a conspicuous gap in the literature, and does it rather well. It could also be a good basis for a graduate course in mathematical physics. It can be recommended to physicists as well and, of course, for physics/mathematics libraries. J.-P. Antoine, Physicalia 28/2, 2006

Strocchi's main emphasis is on the fact that the loss of symmetric behaviour requires both the non-symmetric ground states and the infinite extension of the system. It is written in a pleasant style at a level suitable for graduate students in theoretical physics. While mathematically proper, it is not forbidding for a physics readership; the author is always aware this subject is a branch of physics. It should make profitable reading for many theoretical physicists.

In these notes the author explores the phenomenon of spontaneous symmetry breaking as it arises in classical and quantum systems. Despite many accounts in popular textbooks and a widespread belief, the phenomenon is rather subtle, requires an infinite set of degrees of freedom and an advanced mathematical setting of the system under investigation. [...] The mathematically oriented graduate student will certainly benefit from this thorough, rigorous and detailed investigation. G. Roepstorff, Zentralblatt MATH, Vol. 1075, 2006

"This second edition of Strocchi’s Symmetry breaking presents a complete, generalized and highly rigorous discussion of the subject, based on a formal analysis of conditions necessary for the mechanism of spontaneous symmetry breaking to occur in classical systems, as well as in quantum systems. … this book is specifically recommended for mathematical physicists interested in a deeper and rigorous understanding of the subject, and it should be mandatory for researchers studying the mechanism of spontaneous symmetry breaking." (Serena Hajjawi, Mathematical Reviews, 2008)

"The monograph under review is devoted to the mathematical understanding of spontaneous symmetry breaking (SSB) … . The monograph gives a strong mathematical base to the SSB phenomena in applied mathematics and physics. Therefore it will be very useful for mathematicians and physicists, students of relevant specialties." (Boris V. Loginov, Zentralblatt MATH, Vol. 1145, 2008)