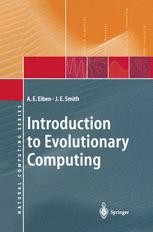 Evolutionary Computing is the collective name for a range of problem-solving techniques based on principles of biological evolution, such as natural selection and genetic inheritance. These techniques are being increasingly widely applied to a variety of problems, ranging from practical applications in industry and commerce to leading-edge scientific research.

This book presents the first complete overview of this exciting field aimed directly at lecturers and graduate and undergraduate students. It is also meant for those who wish to apply evolutionary computing to a particular problem or within a given application area. To this group the book is valuable because it presents EC as something to be used rather than just studied.

Last, but not least, this book contains quick-reference information on the current state-of-the-art in a wide range of related topics, so it is of interest not just to evolutionary computing specialists but to researchers working in other fields.

A.E. Eiben (M.Sc in Maths 1985, Ph.D. in computer science 1991) is one of the European early birds of EC, his first EC paper is dating back to 1989. This was a technical report on Markov chain convergence properties of GAs, that was published in the proceedings of the first European EC conference, the PPSN 1990. Ever since he has been active in the field with special interest in multi-parent recombination, constraint satisfaction, and self-calibrating evolutionary algorithms. During the last decade he was chair or member of the organizing committee of almost all major events of the field: CEC, EP, FOGA, GECCO, PPSN and is a member of the PPSN Steering Committee. Currently he is an editorial board member of premium EC and EC-related jorunals: Evolutionary Computing, Genetic Programming and Evolvable Machines, IEEE Transactions on Evolutionary Computation, Applied Soft Computing, and Natural Computing. Furthermore, he is one of the founders and the executive board members of the European Network of Excellence in Evolutionary Computing, EvoNet. He is one of the series editors of the Springer book series Natural Computing. His also has almost ten years of teaching experience, having given academic and industrial EC courses and organising European EC Summer Schools.

J.E. Smith (Msc. Communicating Computer Systems 1993, PhD in computer science 1998) has been actively researching and publishing on the field of EC since 1994. His work has combined theoretical modelling with empirical studies in a number of areas, especially concerning so-called "self-adaptive" and "hybrid" systems which exhibit the common characteristic of being able to "learn how to learn". This research has been backed up with industrial collaborations applying EC-based (and other) techniques to a range of diverse problems such as VLSI verification and bio-informatics. For a number of years he has served on the programme committees of all of the major (and many smaller) conferences in the field, and as a reviewer for all of the principal journals. Since 2000 he has been one of the co-organisers of the annual International Workshop on Memetic Algorithms (WOMA). In addition to teaching courses in Evolutionary Computing in academia and industry, he has been a member of the Training Committee of the European Network of Excellence in Evolutionary Computing, EvoNet, since its formation and as such has been heavily involved in the production of a variety of different training materials for the EvoNet "flying circus".

"This is intended primarily as a textbook for lecturers and graduate and undergraduate students but will certainly attract a wider readership. The authors explain that each of them has many years of teaching experience, and has given instruction on Evolutionary Computing (EC) … and they realised the need for a suitable textbook and decided to write this one. … Beside serving as an introduction the book is a guide to the state-of-the art. … This is a well-produced and very useful book." (Alex M. Andrew, Robotica, Vol. 22, 2004)