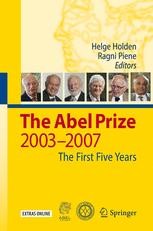 The book presents the winners of the first five Abel Prizes in mathematics: 2003 Jean-Pierre Serre; 2004 Sir Michael Atiyah and Isadore Singer; 2005 Peter D. Lax; 2006 Lennart Carleson; and 2007 S.R. Srinivasa Varadhan.
Each laureate provides an autobiography or an interview, a curriculum vitae, and a complete bibliography. This is complemented by a scholarly description of their work written by leading experts in the field and by a brief history of the Abel Prize. Interviews with the laureates can be found at http://extras.springer.com .

“The volume under review presents the winners of the first five prizes, together with a brief history of the prize and a very short biographical sketch of Selberg, the first, honorary, laureate. There is a short autobiographical piece by each laureate, followed by a more extensive review of their work. … an overview suitable for a general mathematical audience.” (Anton Cox, The London Mathematical Society, Issue 392, May, 2010)

“The book presents the Abel Prize and the laureates of this prize in the first five years. The book is intended as the first volume of a series, each volume covering five years. … The article is written in such a way as to explain the importance of the results at the level ‘of a well-informed and able first year mathematics student’ … . Interesting photographs are included. The articles presenting the results of the recipients of the prizes are written perfectly.” (Krzysztof Ciesielski, Mathematical Reviews, Issue 2011 i)

“This superbly presented book begins with the history of the prize and is followed by a biographical sketch of Alte Selberg who was presented with an Honorary Abel Prize in Oslo in 2002. … Each part contains a bibliography and a curriculum vitae. The text is adorned throughout with many photographs. … This text is an invaluable contribution to the history of twentieth-century mathematics. Save your pennies and buy it.” (Graham Hoare, The Mathematical Gazette, Vol. 95 (533), July, 2011)

“Created in 2002 and first awarded in 2003, the Abel Prize comes the closest to being a ‘Nobel Prize in mathematics.’ … For each winner, the book includes an autobiographical text, curriculum vitae and bibliography, photographs, and an extensive account of the mathematical work. … This is a very well-made book.” (Fernando Q. Gouvêa, The Mathematical Association of America, May, 2011)