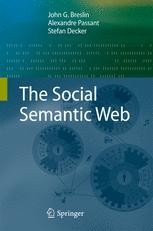 The Social Web (including services such as MySpace, Flickr, last.fm, and WordPress) has captured the attention of millions of users as well as billions of dollars in investment and acquisition. Social websites, evolving around the connections between people and their objects of interest, are encountering boundaries in the areas of information integration, dissemination, reuse, portability, searchability, automation and demanding tasks like querying. The Semantic Web is an ideal platform for interlinking and performing operations on diverse person- and object-related data available from the Social Web, and has produced a variety of approaches to overcome the boundaries being experienced in Social Web application areas.

After a short overview of both the Social Web and the Semantic Web, Breslin et al. describe some popular social media and social networking applications, list their strengths and limitations, and describe some applications of Semantic Web technology to address their current shortcomings by enhancing them with semantics. Across these social websites, they demonstrate a twofold approach for interconnecting the islands that are social websites with semantic technologies, and for powering semantic applications with rich community-created content. They conclude with observations on how the application of Semantic Web technologies to the Social Web is leading towards the "Social Semantic Web" (sometimes also called "Web 3.0"), forming a network of interlinked and semantically-rich content and knowledge.

The book is intended for computer science professionals, researchers, and graduates interested in understanding the technologies and research issues involved in applying Semantic Web technologies to social software. Practitioners and developers interested in applications such as blogs, social networks or wikis will also learn about methods for increasing the levels of automation in these forms of Web communication.

John Breslin is a researcher and adjunct lecturer at the Digital Enterprise Research Institute (DERI) at the National University of Ireland, Galway. His research interests include social software, online communities, and the Semantic Web. He is founder of the Semantically-Interlinked Online Communities (SIOC) project, and he also co-founded Irish community site boards.ie Ltd.

Stefan Decker is a professor at and director of DERI at the National University of Ireland, Galway. His research interests include the Semantic Web, digital libraries, and the social semantic desktop. Stefan has a PhD in computer science from the University of Karlsruhe. His dissertation work was quoted as one of the inspirations for the DARPA Agent Markup Language (DAML) program, which spans the Semantic Web effort.

Alexandre Passant is a post-doctoral researcher at DERI at the National University of Ireland, Galway. His research interests are Semantic Web and Social Software. Alexandre also feeds his own blog under www.apassant.net

“The book focuses mainly on the social Web and possibilities of its integration with the semantic Web. … For Web developers, researchers, and graduate students, this book would be an ideal source for becoming acquainted with the evolving field of social applications on the Web. It may well fit into a seminar in information systems or related graduate study programs.” (M. Bielikova, ACM Computing Reviews, September, 2010)

“This book provides an easy-to-understand insight into Semantic Web and Social Web technologies and highlights research challenges when applying these technologies. … each chapter provides a literature survey which provides an introduction state-of-the-art research from the domain. … can be of interest for those, who consider using any of these Social Web applications in their research as well as those just want to get a solid foundation on the topic. … IT professionals, researchers, academics and graduate students can all benefit from reading this book.” (Frank Hopfgartner, Informer, January, 2012)