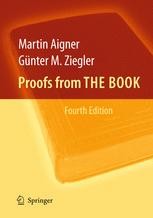 Proofs from THE BOOK

This revised and enlarged fourth edition of "Proofs from THE BOOK" features five new chapters, which  treat classical results such as the "Fundamental Theorem of Algebra", problems about tilings,  but also quite recent proofs, for example of the Kneser conjecture in graph theory. The new edition also presents further improvements and surprises, among them a new proof for "Hilbert's Third Problem".

"... Inside PFTB (Proofs from The Book) is indeed a glimpse of mathematical heaven, where clever insights and beautiful ideas combine in astonishing and glorious ways. There is vast wealth within its pages, one gem after another. Some of the proofs are classics, but many are new and brilliant proofs of classical results. ...Aigner and Ziegler... write: "... all we offer is the examples that we have selected, hoping that our readers will share our enthusiasm about brilliant ideas, clever insights and wonderful observations." I do. ... " Notices of the AMS, August 1999

"... This book is a pleasure to hold and to look at: ample margins, nice photos, instructive pictures, and beautiful drawings ... It is a pleasure to read as well: the style is clear and entertaining, the level is close to elementary, the necessary background is given separately, and the proofs are brilliant. Moreover, the exposition makes them transparent. ..."

“This is the fourth edition of a book that became a classic on its first appearance in 1998. … The authors have tried, in homage to Erdős, to approximate this tome; successive editions appear to be achieving uniform convergence. … Five new chapters have been added … . there is enough new material that libraries certainly should do so. For individuals who do not yet have their own copies, the argument for purchase has just grown stronger.” (Robert Dawson, Zentralblatt MATH, February, 2010)

“This book is the fourth edition of Aigner and Ziegler’s attempt to find proofs that Erdos would find appealing. … this one is a great collection of remarkable results with really nice proofs. The authors have done an excellent job choosing topics and proofs that Erdos would have appreciated. … the proofs are largely accessible to readers with an undergraduate-level mathematics background. … I love the fact that the chapters are relatively short and self-contained. … this is a very nice book.” (Donald L. Vestal, The Mathematical Association of America, May, 2010)

“Martin Aigner and Günter Ziegler succeeded admirably in putting together a broad collection of theorems and their proofs that would undoubtedly be in the Book of Erdős. The theorems are so fundamental, their proofs so elegant, and the remaining open questions so intriguing that every mathematician, regardless of speciality, can benefit from reading this book. The book has five parts of roughly equal length.” (Miklόs Bόna, The Book Review Column, 2011)

“Paul Erdős … had his own way of judging the beauty of various proofs. He said that there was a book somewhere, possibly in heaven, and that book contained the nicest and most elucidating proof of every theorem in mathematics. … Martin Aigner and Günter Ziegler succeeded admirably in putting together a broad collection of theorems … that would undoubtedly be in the Book of Erdős. The theorems are so fundamental … that every mathematician, regardless of speciality, can benefit from reading this book.” (Miklós Bóna, SIGACT News, Vol. 42. (3), September, 2011)

"... It is unusual for a reviewer to have the opportunity to review the first three editions of a book - the first edition was published in 1998, the second in 2001 and the third in 2004. ... I was fortunate enough to obtain a copy of the first edition while travelling in Europe in 1999 and I spent many pleasant hours reading it carefully from cover to cover. The style is inviting and it is very hard to stop part way through a chapter. Indeed I have recommended the book to talented undergraduates and to mathematically literate friends. All report that they are captivated by the material and the new view of mathematics it engenders. By now a number of reviews of the earlier editions have appeared and I must simply agree that the book is a pleasure to hold and to look at, it has striking photographs, instructive pictures and beautiful drawings. The style is clear and entertaining and the proofs are brilliant and memorable. ...

"The newest edition contains three completely new chapters. … The approach is refreshingly straightforward, all the necessary results from analysis being summarised in boxes, and a short appendix discusses the importance of the zeta-function in number theory. … this edition also contains additional material interpolated in the original text, notably the Calkin-Wilf enumeration of the rationals." (Gerry Leversha, The Mathematical Gazette, March, 2005)

"A lot of solid mathematics is packed into Proofs. Its thirty chapters, divided into sections on Number Theory, Geometry, Analysis … . Each chapter is largely independent; some include necessary background as an appendix. … The key to the approachability of Proofs lies not so much in the accessibility of its mathematics, however, as in the rewards it offers: elegant proofs of interesting results, which don’t leave the reader feeling cheated or disappointed." (Zentralblatt für Didaktik de Mathematik, July, 2004)