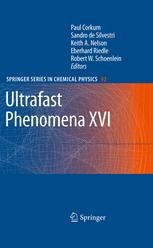 Ultrafast Phenomena XVI presents the latest advances in ultrafast science, including both ultrafast optical technology and the study of ultrafast phenomena. It covers picosecond, femtosecond and attosecond processes relevant to applications in physics, chemistry, biology, and engineering. Ultrafast technology has a profound impact in a wide range of applications, amongst them biomedical imaging, chemical dynamics, frequency standards, material processing, and ultrahigh speed communications. This book summarizes the results presented at the 16th International Conference on Ultrafast Phenomena and provides an up-to-date view of this important and rapidly advancing field.

Paul Corkum: Atomic, Molecular and Optical Science Group Leader at Steacie of the National Research Council, he is a member of the Royal Societies of London and of Canada. He was the recipient of the Optical Society of America's Charles H. Townes award and the IEEE's Quantum electronics award in 2005. In 2006 he received the American Physical Society's Arthur L. Schawlow Prize. Corkum’s research launched attosecond science. After studying the interaction of intense light pulses with atoms and molecules he and his group proposed how atomic and molecular gases can be used to produce attosecond pulses. In 2002 they measured the motion of hydrogen atoms in a hydrogen molecular ion with a timing precision of 200-attoseconds and a spatial precision of 0.02 Angstroms. In 2004 they demonstrated how attosecond technology can be used to image the highest occupied molecular orbital of Nitrogen. More recently they were able to strobe the attosecond motion of an electron in a hydrogen molecule almost instantaneously as the molecule breaks.

Sandro De Silvestri: He is professor at the Department of Physics of Politecnico in Milan, Italy. He is presently director of the European Large Scale Infrastructure "Center for Ultrafast Science and Biomedical Optics (CUSBO)", within the program of providing access to europen reasearch groups. He is also director of the "Centre of Ultrafast and Ultraintense Optical Science" (ULTRAS) of CNR-INFM. He is Fellow of the Optical Society of America and he is member of organising committee of several international congress in the field of photonics and ultrafast phenomena. He has made a number of significant contributions to the field of "Ultrafast Phenomena", extending for a period of about 25 years, in a variety of topics such as: (i) coherent vibrational spectroscopy; (ii) development of techniques for the generation of few optical cycle pulses either with high energy or tunable from near-IR to visible; (iii) study of ultrafast dynamics in organic and quantum confined systems; (iv) carrier envelope phase effects on strong field photoionization and high order harmonic generation; (v) generation of attosecond pulses.

Keith Nelson: He is professor at the Department of Chemistry of MIT. His research is aimed at time-resolved optical study and control of condensed matter structural changes and the collective modes of motion through which they occur: (i) phase transitions or other collective structural rearrangements in crystalline solids; (ii) dynamics of the lattice vibrational modes; (iii) interactions between reactive molecular modes and lattice vibrations in reaction dynamics. He has developed femtosecond pulse shaping techniques for multiple-pulse excitation and coherent control of crystal lattice vibrations whose motions are involved in ferroelectric phase transitions, and for generation of ultrahigh-frequency acoustic waves whose motions are involved in structural relaxation of viscoelastic fluids and polymers. He has developed novel methods for recording complete femtosecond time-resolved spectroscopy measurements in a single laser shot, with the objective of observing ultrafast, irreversible structural and chemical changes in solids. In the ferroelectric crystals he has studied terahertz (THz) frequency lattice vibrations, by fabricating integrated waveguides and other structures through femtosecond laser machining providing further control over THz waves. He is extending these and other methods and applying them toward study of and control over condensed matter structural changes.

Eberhard Riedle: He is professor for experimental physics at the Department for Physics of the Ludwig-Maximilians University of Munich, Germany. His interest and research focuses on the ultrafast dynamics, mechanisms and control of ultrafast chemical reactions, e.g. proton and electron transfer, molecular switches and molecules in zeolites. For these investigations he develops new methods and techniques for the generation and characterisation of extremely short tunable light pulses in the visible, NIR and UV. The research is performed within the framework of the SFB ADLIS in Vienna, the newly founded SFB 749 on "dynamics and intermediates of molecular transformations", the International Max Planck Research School on Advanced Photon Science (IMPRS-APS) and most importantly the newly founded exclellence cluster "Munich-Centre for Advanced Photonics (MAP)". In the latter he coordinates the research area " Molecular dynamics and elementary chemical reactions". He was deputy chair (2001-2004) and chair (2004-2007) of the Molecular Physics division of the Deutsche Physikalische Gesellschaft (DPG). Among a large number of meetings he was the responsible local organizer of the 68. Physikertagung der DPG (2004) and local chair for CLEO-Europe/EQEC (2033, 2005,2007).

Robert Schoenlein:  He is Staff Scientist at LBNL. His research included the development of a 8 fs pulse novel laser system in the blue-green spectral region, the application to three-pulse photon echo studies of electronic dephasing and vibrational dynamics in semiconductor nanocrystals and ultrafast dynamics of the first step in vision. In 1994 he received the Adolph Lomb Medal from OSA. He initiated a new research direction in ultrafast x-ray science with the first time generation of 300 fs pulses in the hard x-ray regime (30 keV) via Thomson scattering between relativistic electrons from a LINAC and terawatt femtosecond laser pulses. In 2000, Schoenlein and co-workers demonstrated for the first time, the generation of femtosecond synchrotron pulses via laser manipulation of a stored electron beam. This approach serves as the basis for new femtosecond x-ray beamlines now under construction at the Advanced Light Source, BESSY, and the Swiss Light Source. Current research activities are in the application of ultrafast x-ray techniques to investigate atomic and electronic structural dynamics in condensed matter including photoinduced phase transitions in correlated electron systems, ferroelectrics, transition-metal complexes and molecular dynamics in solution.