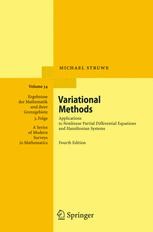 Hilbert's talk at the second International Congress of 1900 in Paris marked the beginning of a new era in the calculus of variations. A development began which, within a few decades, brought tremendous success, highlighted by the 1929 theorem of Ljusternik and Schnirelman on the existence of three distinct prime closed geodesics on any compact surface of genus zero, and the 1930/31 solution of Plateau's problem by Douglas and Radó. The book gives a concise introduction to variational methods and presents an overview of areas of current research in the field.

The fourth edition gives a survey on new developments in the field. In particular it includes the proof for the convergence of the Yamabe flow and a detailed treatment of the phenomenon of blow-up. Also the recently discovered results for backward bubbling in the heat flow for harmonic maps or surfaces are discussed. Aside from these more significant additions, a number of smaller changes throughout the text have been made and the references have been updated.

Michael Struwe is full Professor of Mathematics at ETH Zurich.

On April 1, 1986 Michael Struwe was appointed assistant professor, on October 1, 1990 associate professor and in 1993 he became full Professor of Mathematics at the ETH Zurich. From October, 2002 to September, 2004 he served as head of the ETH Mathematics Department. His research focuses on non-linear partial differential equations and the calculus of variations as well as their applications in mathematical physics and differential geometry.

In 2006 he received the Credit Suisse Award For Best Teaching.

"The fourth edition of Michael Struwe’s book Variational Methods: Applications to Nonlinear Partial Differential Equations and Hamiltonian Systems was published in 2008, 18 years after the first edition. … The bibliography alone would make it a valuable reference as it contains nearly 500 references. … Struwe’s book is addressed to researchers in differential geometry and partial differential equations." (John D. Cook, MAA Online, January, 2009)

“This is the fourth edition of a standard reference work on direct methods in the calculus of variations. … The book contains a wealth of important results that would otherwise be hard to find in one single place.” (M. Kunzinger, Monatshefte für Mathematik, Vol. 160 (4), July, 2010)