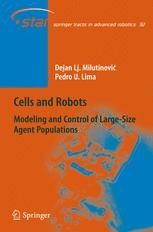 Cells and Robots is an outcome of the multidisciplinary research extending over Biology, Robotics and Hybrid Systems Theory. It is inspired by modeling reactive behavior of the immune system cell population, where each cell is considered as an independent agent. In our modeling approach, there is no difference if the cells are naturally or artificially created agents, such as robots. This appears even more evident when we introduce a case study concerning a large-size robotic population scenario. Under this scenario, we also formulate the optimal control of maximizing the probability of robotic presence in a given region and discuss the application of the Minimum Principle for partial differential equations to this problem. Simultaneous consideration of cell and robotic populations is of mutual benefit for Biology and Robotics, as well as for the general understanding of multi-agent system dynamics.

The text of this monograph is based on the PhD thesis of the first author. The work was a runner-up for the fifth edition of the Georges Giralt Award for the best European PhD thesis in Robotics, annually awarded by the European Robotics Research Network (EURON).

Dejan Milutinovic received his Dipl. Ing. (1995) and M.Sc. (1999) in Electrical Engineering at the University of Belgrade, Serbia, Yugoslavia, and PhD in Electrical and Computer Engineering (2004) at Instituto Superior Técnico, Lisbon Technical University, Portugal.

In 1995 he was employed at "Mihajlo Pupin" Institute, Belgrade, working on real-time control industrial applications. In 2000 he moved to the Institute of Systems and Robotics, Lisbon, where he worked on his PhD thesis. From 2004 to 2006 he was a post-doc at Theoretical Biology Department of Utrecht University, the Netherlands. Presently, he is a post-doc at Biostatistics and Bioinformatics Department of Duke University Medical Center, NC, USA.

His scientific interest is in the area of modeling and control of stochastic dynamical systems applied to the immune system and Robotics. In 2005, he was recognized as a runner-up for the best PhD thesis of European Robotics by the European Robotics Research Network (EURON) jury in the 5th edition of Georges Giralt PhD Award.

Pedro Lima got his Ph.D. (1994) in Electrical Engineering at the Rensselaer Polytechnic Institute, Troy, NY, USA. Currently, he is an Associate Professor at Instituto Superior Técnico, Lisbon Technical University. He is also a member of the Institute for Systems and Robotics, a Portuguese private research institution, where he is co-coordinator of the Intelligent Systems group and a member of the Scientific Council.

Pedro Lima is a Trustee of the RoboCup Federation, and was the General Chair of RoboCup2004, held in Lisbon. He is a member of the editorial board of the International Journal of Advanced Robotic Systems and of the Portuguese magazine Robótica, a founding member of the Portuguese Robotics Society, the elected chair of the IEEE RAS Portugal Chapter, and a senior member of the IEEE. He is also the co-editor of two special issues of the IEEE Robotics and Automation Magazine, one special issue of Elsevier’s Journal of Robotics Autonomous Systems, the author of a book and several journal and conference papers.

His scientific interests are in the areas of hybrid systems, discrete event systems and reinforcement learning, mainly in their applications to complex large-scale systems, such as multi-robot systems. He has also been very active in the promotion of Science and Technology to the society, through the organization of Robotics events in Portugal, including the Portuguese Robotics Open since 2001.

"This interesting monograph is devoted to the study of multi-agent, populations of biological cells and robot teams. … The main objective of the approach is to provide solutions to the problem of how dynamics of an individual agent propagates to the population dynamics. … This original monograph has a wide interest for scholars in the area of multi-agent systems, including computational biology, biometrical engineering, nano-robotics, and even aerospace engineering." (Silvia Curteanu, Zentralblatt MATH, Vol. 1147, 2008)