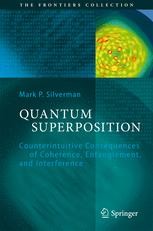 Coherence, entanglement, and interference arise from quantum superposition, the most distinctive and puzzling feature of quantum physics. Silverman, whose extensive experimental and theoretical work has helped elucidate these processes, presents a clear and engaging discussion of the role of quantum superposition in diverse quantum phenomena such as the wavelike nature of particle propagation, indistinguishability of identical particles, nonlocal interactions of correlated particles, topological effects of magnetic fields, and chiral asymmetry in nature. He also examines how macroscopic quantum coherence may be able to extricate physics from its most challenging quandary, the collapse of a massive degenerate star to a singularity in space in which the laws of physics break down.
Explained by a physicist with a concern for clarity and experimental achievability, the extraordinary nature of quantum superposition will fascinate the reader not only for its apparent strangeness, but also for its comprehensibility.

Mark P. Silverman is Professor of Physics at Trinity College. After earning a Ph.D. in Physics from Harvard University, he has pursued a wide range of research interests concerning the structure of matter, the properties of light, and the dynamics of stars and galaxies. He has held the Joliot Chair of Physics at the Ecole Supérieure de Physique et Chimie Industrielles in Paris, was Erskine Professor at the University of Canterbury in Christchurch, and Chief Researcher at the Hitachi Advanced Research Laboratory (then) near Tokyo. Besides numerous articles on physics, Dr. Silverman has written of his educational experiments in "self-directed learning". For relaxation, he enjoys playing the flute and hiking in the mountains.

"Speaking as one with no math background at all and no formal training in physics, I still found this book fascinating and thoroughly enjoyable. Silverman is something of a polymath, with wide-ranging interests, and he succeeds in bringing together concepts from different fields of study in unexpected but very fruitful ways. He surely must be a wonderful classroom teacher; his enthusiasm for his subject matter is contagious, and to say that his use of language in his writing is masterful is an understatement. …he is always engaging, and never dry. Throughout, his descriptions are a model of clarity, and the precision of his vocabulary in the simplest nontechnical sentences is awe-inspiring in its elegance. This is not a textbook, but any serious student of physics who doesn’t own a copy is missing out on an important book."

"Quantum Superposition is an extensive revision of Silverman’s More than One Mystery: Explorations in Quantum Interference … . By looking at different forms of superposition, Silverman is able to explore a wide range of phenomena, and he is not shy about addressing controversial topics. The book includes discussions of Schrödinger’s cat, Wheeler’s delayed choice experiment, and macroscopic quantum interference. … Summing Up: Recommended. Graduate students and up." (E. Kincanon, CHOICE, Vol. 45 (11), August, 2008)

“‘Quantum Superposition. Counterintuitive Consequences of Coherence, Entanglement, and Interference’ is a thorough, consistent and well-written book on quantum mechanics that I also consider as the remarkable attempt of the author to put the fundamentally deep order onto the quantum mechanics’ wonderland around the phenomena of quantum interference that are originated from the quantum principle of superposition in its different facets. Undoubtedly and definitely, this book must be recommended for the general audience of readers who are interested in the fundamental grounds of quantum mechanics.” (Eugene Kryachko, Zentralblatt MATH, Vol. 1183, 2010)