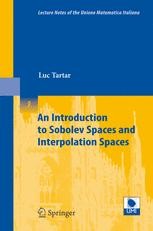 An Introduction to Sobolev Spaces and Interpolation Spaces

After publishing an introduction to the Navier–Stokes equation and oceanography (Vol. 1 of this series), Luc Tartar follows with another set of lecture notes based on a graduate course in two parts, as indicated by the title. A draft has been available on the internet for a few years. The author has now revised and polished it into a text accessible to a larger audience.

Luc Tartar studied at Ecole Polytechnique in Paris, France, 1965-1967, where he was taught by Laurent Schwartz and Jacques-Louis Lions in mathematics, and by Jean Mandel in continuum mechanics.

He did research at Centre National de la Recherche Scientifique, Paris, France, 1968-1971, working under the direction of Jacques-Louis Lions for his thèse d'état, 1971.

He did research at Commissariat à l'Energie Atomique, Limeil, France, 1982-1987.

In 1987, he was elected Correspondant de l'Académie des Sciences, Paris, in the section Mécanique.

Partly in collaboration with François Murat, he has specialized in the development of new mathematical tools for solving the partial differential equations of continuum mechanics (homogenization, compensated compactness, H-measures), pioneering the study of microstructures compatible with the partial differential equations describing the physical balance laws, and the constitutive relations.

He likes to point out the defects of many of the models which are used, as a natural way to achieve the goal of improving our understanding of mathematics and of continuum mechanics.

"This book is based on a set of lecture notes prepared by the author from a graduate course … . The main themes are Sobolev spaces and interpolation theory. … The book contains 42 chapters, each intended to contain the amount of material which would be suitable for a graduate lecture. … As well as being an excellent source of material for a graduate course on topics … this book contains a great deal which will be of interest to the seasoned researcher." (W. D. Evans, Zentralblatt MATH, Vol. 1126 (3), 2008)

"This is a book that has grown out of a graduate course taught by the author in 2000. It keeps the structure of a set of lectures … . Many interesting remarks are given along the text, and by means of a large number of footnotes the author explains many anecdotes and personal experiences related with people associated to the development of the topics included in the text. This book can be useful not only as a source in graduate courses, but also for researchers." (Joan L. Cerdà, Mathematical Reviews, Issue 2008 g)