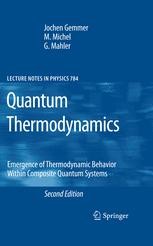 This introductory text treats thermodynamics as an incomplete description of quantum systems with many degrees of freedom. Its main goal is to show that the approach to equilibrium—with equilibrium characterized by maximum ignorance about the open system of interest—neither requires that many particles nor is the precise way of partitioning, relevant for the salient features of equilibrium and equilibration. Furthermore, the text depicts that it is indeed quantum effects that are at work in bringing about thermodynamic behavior of modest-sized open systems, thus making Von Neumann’s concept of entropy appear much more widely useful than sometimes feared, far beyond truly macroscopic systems in equilibrium.

This significantly revised and expanded second edition pays more attention to the growing number of applications, especially non-equilibrium phenomena and thermodynamic processes of the nano-domain. In addition, to improve readability and reduce unneeded technical details, a large portion of this book has been thoroughly rewritten.

This textbook provides a comprehensive approach, from a theoretical physics point of view, to the question of emergence of thermodynamic behavior in quantum systems... [Its] strength lies in the careful development of the relevant concepts, in particular the question how large a system needs to be to exhibit thermodynamic behavior is addressed. Luc Rey-Bellet (Amherst, MA), Mathematical Reviews 2007e

“The aim of this textbook is to show how thermodynamic behavior can emerge for a given finite quantum system. … The book is written in a conceptually simple language, the focus being rather on the careful interpretation of the concepts at hand and their illustrations on model systems. … presents some applications to model systems, which allows one to illustrate more precisely previously introduced notions.” (Gabriel Stoltz, Mathematical Reviews, Issue 2011 f)

“This book introduces into the emergent field of the application of thermodynamics to describe phenomena arising with open quantum systems which consist in one or few particles. … A clue of this book is that ergodicity or mixing are replaced by a kind of typicality which is introduced and used as a basic concept to define equilibrium. … This is a heuristic approach and the results derived show how it works well.” (K.-E. Hellwig, Zentralblatt MATH, Vol. 1221, 2011)