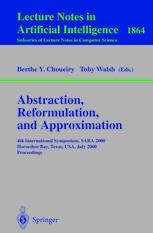 This volume contains the proceedings of SARA 2000, the fourth Symposium on Abstraction, Reformulations, and Approximation (SARA). The conference was held at Horseshoe Bay Resort and Conference Club, Lake LBJ, Texas, July 26– 29, 2000, just prior to the AAAI 2000 conference in Austin. Previous SARA conferences took place at Jackson Hole in Wyoming (1994), Ville d’Est´erel in Qu´ebec (1995), and Asilomar in California (1998). The symposium grewout of a series of workshops on abstraction, approximation, and reformulation that had taken place alongside AAAI since 1989. This year’s symposium was actually scheduled to take place at Lago Vista Clubs & Resort on Lake Travis but, due to the resort’s failure to pay taxes, the conference had to be moved late in the day. This mischance engendered eleventh-hour reformulations, abstractions, and resource re-allocations of its own. Such are the perils of organizing a conference. This is the ?rst SARA for which the proceedings have been published in the LNAI series of Springer-Verlag. We hope that this is a re?ection of the increased maturity of the ?eld and that the increased visibility brought by the publication of this volume will help the discipline grow even further. Abstractions, reformulations, and approximations (AR&A) have found - plications in a variety of disciplines and problems including automatic progr- ming, constraint satisfaction, design, diagnosis, machine learning, planning, qu- itative reasoning, scheduling, resource allocation, and theorem proving. The - pers in this volume capture a cross-section of these application domains.