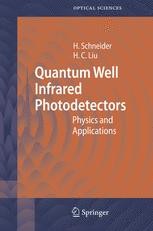 Addressed to both students as a learning text and scientists/engineers as a reference, this book discusses the physics and applications of quantum-well infrared photodetectors (QWIPs). It is assumed that the reader has a basic background in quantum mechanics, solid-state physics, and semiconductor devices. To make this book as widely accessible as possible, the treatment and presentation of the materials is simple and straightforward. The topics for the book were chosen by the following criteria: they must be well-established and understood; and they should have been, or potentially will be, used in practical applications. The monograph discusses most aspects relevant for the field but omits, at the same time, detailed discussions of specialized topics such as the valence-band quantum wells.

Harald Schneider completed his PhD at the Max-Planck Institute for Solid State Research (Stuttgart, D) in 1988. In the same year he got the Otto-Hahn-Medal, awarded for the best PhD theses of the Max-Planck-Society. In 1989, he joined the Fraunhofer-Institute for Solid State Physics (Freiburg, D), where he was working on infrared optoelectronics. For the development of infrared cameras of highest thermal resolution, he and his colleagues were awarded the 2001 German Science Foundation Award (Preis des Stifterverbands). In 2005, he switched to the Forschungszentrum Rossendorf, where he is now leading the Semiconductor Spectroscopy Division. He has authored and co-authored more than 150 publications.

H. C. Liu got his PhD in applied physics from the University of Pittsburgh in 1987 as an Andrew Mellon Predoctoral Fellow. He is currently the Quantum Devices Group Leader in the Institute for Microstructural Sciences at the National Research Council of Canada. He has authored and co-authored about 250 refereed journal articles (with about 80 first or sole authored), and given 90 talks (53 invited) at international conferences. He has been elected as a Fellow of the American Physical Society, granted over a dozen patents, and awarded the Herzberg Medal from the Canadian Association of Physicists in 2000 and the Bessel Award from the Alexander von Humboldt Foundation in 2001.

Both authors were involved in QWIPs from the very beginning, including basic research, device optimization, system applications, and novel directions. Their combined work covers a significant share of QWIP research that has been conducted worldwide.