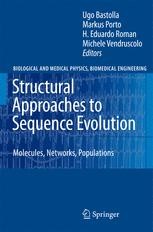 Structural requirements constrain the evolution of biological entities at all levels, from macromolecules to their networks, right up to populations of biological organisms. Classical models of molecular evolution, however, are focused at the level of the symbols - the biological sequence - rather than that of their resulting structure. Now recent advances in understanding the thermodynamics of macromolecules, the topological properties of gene networks, the organization and mutation capabilities of genomes, and the structure of populations make it possible to incorporate these key elements into a broader and deeply interdisciplinary view of molecular evolution. This book gives an account of such a new approach, through clear tutorial contributions by leading scientists specializing in the different fields involved.

Ugo Bastolla is researcher in the laboratory of bioinformatics of the
Centro de Astrobiologia in Madrid (Spain), on leave to the Centro de
Biologia Molecular of the Spanish CSIC. Since his degree in physics
with Luca Peliti he has always been interested in biological topics,
above all evolution. He got is PhD in Rome with Giorgio Parisi working
on disordered dynamical systems inspired to biology and was postdoc in
Julich (Germany) with Peter Grassberger, studying statistical mechanical
models of polymers, in Berlin (Germany) with E.W. Knapp studying simple
protein models, in Golm (Germany) with Michael Laessig, studying
ecological models, and finally in Madrid (Spain) in the bioinformatics
group of Alfonso Valencia. His main research interest consists in combining
simple models of protein thermodynamics and evolution.

Markus Porto is professor of Theoretical Solid State Physics at the
Institut fur Festkorperphysik at the Technische Universitat Darmstadt
(Germany). He received his PhD at the Universitat Giessen (Germany). His
research interests cover many aspects of solid state and statistical
physics, including transport and relaxation in disordered systems and
biophysics, as well as applying methods of statistical physics to model
molecular evolution.

H. Eduardo Roman is Research Fellow at the Department of Physics of the
University of Milan-Bicocca. He earned his Ph.D at the International School
for Advanced Studies, Trieste (Italy), and has been Privat Dozent at the
Universities of Hamburg and Giessen (Germany). His research interests cover
many aspects of Statistical Physics, from fractals to stochastic phenomena,
biophysics, proteins and evolution, and ab-initio electronic calculations in
molecules.

Michele Vendruscolo is a Royal Society University Research Fellow at the
Department of Chemistry, University of Cambridge. He received his PhD in
Condensed Matter Physics in 1996 at the International School for Advanced
Studies, Trieste (Italy). His research is mainly focussed on understanding
the biophysical principles regulating the behaviour and the evolution of
proteins.