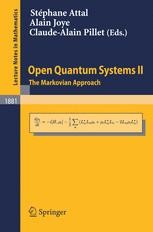 Understanding dissipative dynamics of open quantum systems remains a challenge in mathematical physics. This problem is relevant in various areas of fundamental and applied physics. From a mathematical point of view, it involves a large body of knowledge. Significant progress in the understanding of such systems has been made during the last decade. These books present in a self-contained way the mathematical theories involved in the modeling of such phenomena. They describe physically relevant models, develop their mathematical analysis and derive their physical implications.

In Volume I the Hamiltonian description of quantum open systems is discussed. This includes an introduction to quantum statistical mechanics and its operator algebraic formulation, modular theory, spectral analysis and their applications to quantum dynamical systems.

Volume II is dedicated to the Markovian formalism of classical and quantum open systems. A complete exposition of noise theory, Markov processes and stochastic differential equations, both in the classical and the quantum context, is provided. These mathematical tools are put into perspective with physical motivations and applications.