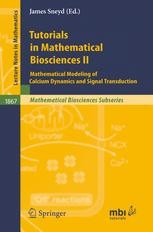 This book presents a series of models in the general area of cell physiology and signal transduction, with particular attention being paid to intracellular calcium dynamics, and the role played by calcium in a variety of cell types. Calcium plays a crucial role in cell physiology, and the study of its dynamics lends insight into many different cellular processes. In particular, calcium plays a central role in muscular contraction, olfactory transduction and synaptic communication, three of the topics to be addressed in detail in this book. In addition to the models, this book also presents much of the underlying physiology, so that readers may learn both the mathematics and the physiology at the same time, and see how the models are applied to specific biological questions. It is thus neither a mathematics book nor a physiology book, but has features from both sides of the fence.

It is intended primarily as a graduate text or a research reference. However, some parts of the book, particularly the introductory chapters on calcium dynamics will be well within the reach of some undergraduates. It will serve as a concise and up-to-date introduction to all those who wish to learn about the state of calcium dynamics modeling, and how such models are applied to physiological questions.

"The book is mainly a research reference book but may be of interest for graduate students specializing in the fields of cell physiology and signal transduction. The book is an excellent, up-to-date survey for those who wish to learn about the state of calcium dynamic modelling and how such models are applied to physiological questions … . Much of the underlying physiology is clearly presented to help the reader to follow the modelling." (Johnny Tom Ottesen, Mathematical Reviews, Issue 2006 h)