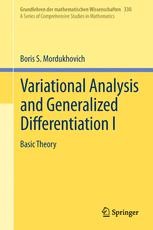 Variational Analysis and Generalized Differentiation I

This monograph in two volumes contains a comprehensive and state-of-the art study of the basic concepts and principles of variational analysis and generalized differentiation in both finite-dimensional and infinite dimensional spaces and presents numerous applications to problems in the optimization, equilibria, stability and sensitivity, control theory, economics, mechanics, etc. The first of volume is mainly devoted to the basic theory of variational analysis and generalized differentiations, while the second volume contains various applications. Both volumes contain abundant bibliographies and extensive commentaries.

"The combination of the two volumes provide a thorough, self-contained, well-motivated view of an important line of research in variational analysis. This is a reference text which readers having an interest in variational analysis or any of the application areas should find to be a very useful resource." (Adam B. Levy, SIAM Review, Vol. 48 (3), 2006)

"This two-volume book is a deep and wide treatise on variational analysis and its relationships with several fields of mathematics … . Among several aspects which make the book beautiful and interesting, there is the fact that the reader is met at a classical level of mathematical analysis … . it is precious for all scholars who want to learn modern variational analysis and related fields; indeed, this is a fundamental tool for those who are involved in the applications of mathematics." (Franco Giannessi, Journal of Optimization Theory and Applications, Vol. 131 (2), 2006)

"This … monograph reflects the abiding and enthusiastic interest of the author in variational analysis. … Besides mathematics, there are extensive commentaries on the history and genesis of major topics under consideration … open problems, and an extensive bibliography (1379 references). These features make the book appreciated by students and experts in the field. The book will definitely serve as a fundamental read and also a useful reference. It is highly recommended to all libraries and researchers in the area of variational analysis and optimization." (Panos Pardalos, Journal of Global Optimization, Vol. 36, 2006)

"The new two-volume monograph by B.S. Mordukhovich contains a comprehensive presentation of … calculus together with numerous applications and extensive commentaries. … In the first volume dedicated to ‘basic theory’, Mordukhovich systematically and precisely develops his generalized differential calculus … . this outstanding work contains a considerable number of previously unpublished results. We believe that its both volumes will soon become an indispensable part of the library of each researcher interested in the fields listed above." (Jirí V. Outrata and Michal Cervinka, Mathematical Methods of Operations Research, Vol. 65 (1), 2007)

"The author succeeded to place at our disposal a comprehensive and deep insight into a fruitful and continuously developing area in mathematics. He presented the theory of modern variational analysis and generalized differentiation in its full generality. This allowed to cover a large range of applications. We appreciate that the book synthetize a life time work of an important mathematician, and warmly recommend it to specialists in mathematical analysis, differential equations or mathematical economics." (Mihai Pascu, Revue Roumaine de Mathématique Pures et Appliquées, Vol. LII (5), 2007)

"In this book, the author obtained principally new results for optimal control problems described by evolutionary inclusions with state variables living in Banach spaces. … The book also investigates non-standard optimal control problems described by equations with partial derivatives of parabolic and hyperbolic types. … the book would be useful for scientists working in the fields of mathematics and its applications, mechanics, control systems, economics, as well as for graduate and post-graduate students specializing in these fields." (A. V. Arutyunov and B. T. Polyak, Automation and Remote Control, Vol. 70 (6), 2009)

“The present monograph provides a comprehensive theory of generalized differentiation and its applications in infinite dimensions. … Each chapter … is complemented by historic and bibliographic remarks which are based on an impressive list of references and which allow to put parallel developments in nonsmooth analysis into a context with the author’s work. … will become a fundamental reference in variational analysis and that they will stimulate a lot of fruitful applications in the abundance of problems where nonsmoothness is an inherent issue.” (René Henrion, Operations Research Letters, Vol. 35 (4), July, 2007)