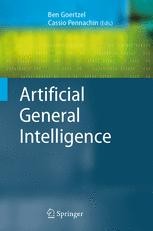 Each author explains a specific aspect of AGI in detail in each chapter, while also investigating the common themes in the work of diverse groups, and posing the big, open questions in this vital area.

The book will be of interest to researchers and students who require a coherent treatment of AGI and the relationships between AI and related fields such as physics, philosophy, neuroscience, linguistics, psychology, biology, sociology, anthropology and engineering.

The chief editor of the book, Dr. Ben Goertzel, has published 4 research treatises in AI, cognitive science and systems theory, a biography of Linus Pauling, and one previous edited volume (in the area of dynamical psychology), as well as numerous research papers (for his CV, see www.goertzel.org/ben/newResume.htm).

Dr. Ben Goertzel has been involved in AI research and application development since the late 1980’s. He holds a PhD in mathematics from Temple University, and over the period 1989-1997 he held several university faculty positions in mathematics, computer science, and psychology, in the US, New Zealand and Australia.

Currently, as CEO of the software firms Biomind LLC and Novamente LLC, he is leading a team of AI researchers in the development and commercialization of Artificial General Intelligence technology.

Cassio Pennachin has been leading software development projects since the mid-1990's, in artificial intelligence, bioinformatics, operations research and other areas.  Prior to taking on his current role as CTO of Novamente LLC and Biomind LLC, he served as founder and CEO of Vetta Technologies, a Brazil-based software consulting firm, and he led a team developing mass spectrometry data analysis software for Proteometrics.  From 1998-2001 Cassio was the former VP of R&D at Webmind Inc., leading several projects in AI, data mining and information retrieval.

Ben and Cassio are the chief architects of the Novamente AI Engine, one of the AGI projects described in the book.