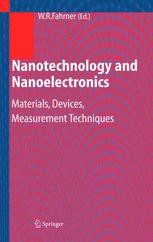 This book provides a concise and didactically structured presentation of nanotechnology as matters stand. Both students and engineers can gain valuable insights into the historical development, production, and characterization procedures of structures in the nanometer range, their electrical applications, measuring procedures for the determination of nanodefect, nanolayer, and nanoparticle characteristics, and the major techniques of preparation in nanotechnology. Based on known facts, an evaluation of nanotechnology, its further development, and its future prospects are attempted.

Wolfgang Fahrner (*1945) received his education in Freiburg and Darmstadt, Germany, and in Montpellier (France). He was awarded a doctorate for his thesis on "Ion implantation in MOS". His research includes measurement of minority carrier lifetimes (IBM East Fishkill), passivation of power devices and secondary ion mass spectroscopy (Fraunhofer Society), and radiation damage in semiconductors (Hahn-Meitner Institute, Berlin). In 1981, Prof. Fahrner obtained his postdoctoral qualification at Berlin Technical University’s Department of Electrical Engineering. In 1986, he was appointed associate professor and in 1988, he was offered the Chair of Electronic Devices at Hagen University. Prof. Fahrner is a member of the Electrochemical Society, DPG, IEEE Senior Member, and has initiated the "Nanotechnology Cooperation NRW".