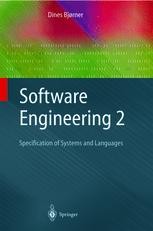 Specification of Systems and Languages

The art, craft, discipline, logic, practice and science of developing large-scale software products needs a professional base. The textbooks in this three-volume set combine informal, engineeringly sound approaches with the rigor of formal, mathematics-based approaches.

This volume covers the basic principles and techniques of specifying systems and languages. It deals with modelling the semiotics (pragmatics, semantics and syntax of systems and languages), modelling spatial and simple temporal phenomena, and such specialized topics as modularity (incl. UML class diagrams), Petri nets, live sequence charts, statecharts, and temporal logics, including the duration calculus. Finally, the book presents techniques for interpreter and compiler development of functional, imperative, modular and parallel programming languages.

This book is targeted at late undergraduate to early graduate university students, and researchers of programming methodologies. Vol. 1 of this series is a prerequisite text.

"The present volume is the second one of a trilogy on formal development of large scale systems. … Each topic is presented by means of many examples … . The end of each chapter includes several exercises that demonstrate the topics in a more realistic setting. The quite large spectrum of modelling and specification tools … provide the reader with a comprehensive understanding … . the book appeals to researchers and to practitioners involved in language specification and modelling of real time and concurrent systems." (Tudor Balanescu, Zentralblatt MATH, Vol. 1095 (21), 2006)