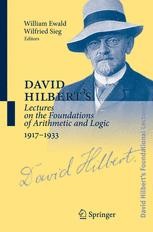 The core of Volume 3 consists of lecture notes for seven sets of lectures Hilbert gave (often in collaboration with Bernays) on the foundations of mathematics between 1917 and 1926. These texts make possible for the first time a detailed reconstruction of the rapid development of Hilbert’s foundational thought during this period, and show the increasing dominance of the metamathematical perspective in his logical work: the emergence of modern mathematical logic; the explicit raising of questions of completeness, consistency and decidability for logical systems; the investigation of the relative strengths of various logical calculi; the birth and evolution of proof theory, and the parallel emergence of Hilbert’s finitist standpoint. The lecture notes are accompanied by numerous supplementary documents, both published and unpublished, including a complete version of Bernays’s Habilitationschrift of 1918, the text of the first edition of Hilbert and Ackermann’s Grundzüge der theoretischen Logik (1928), and several shorter lectures by Hilbert from the later 1920s. These documents, which provide the background to Hilbert and Bernays’s monumental Grundlagen der Mathematik (1934, 1938), are essential for understanding the development of modern mathematical logic, and for reconstructing the interactions between Hilbert, Bernays, Brouwer, and Weyl in the philosophy of mathematics.

“The selection concerns above all lecture courses on the foundations of arithmetic and logic held between 1917 and 1933. … The edition deserves highest praise. It shows intuitively the development of foundational ideas in the making which finally led to the new mathematical subdiscipline of proof theory.” (Volker Peckhaus, Studia Logica, Vol. 105, 2017)

“The editors have produced an impeccable and exhaustive critical edition of all of Hilbert’s papers on mathematical logic and meta-mathematics written between 1917 and 1931 in German. … this volume is excellently designed for the historian as a working source book for whom it is clearly indispensable. But it should also serve those still interested in the Foundations of Mathematics and its open problems left by Hilbert and his students … .” (Catharine C. Hennix, Nieuw Archief voor Wiskunde, Vol. 17 (4), December, 2016)

“The volume under review is the third in a projected series of six presenting Hilbert’s unpublished lectures in the foundations of the exact sciences. … This volume is a wonderful achievement. … The book belongs in the library of anyone interested in logic and the foundations of mathematics. Indeed, it should be placed in one of the lower shelves, so as to be ready to hand for frequent use.” (Paolo Mancosu, Philosophia Mathematica, Vol. 23 (1), February, 2015)