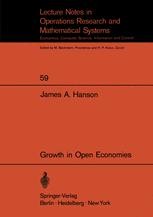 The years following World War II have witnessed an increasing interest in the effects of growth on trade, the patterns of international specialization, and the terms of trade. On the one hand, some English economists have maintained the Ricardian tradition of diminishing returns, rising food prices and, therefore, declining British terms of trade, while,on the other hand Prebisch, Singer, and other critics have attempted to document and explain a long-run decline in the terms of trade of the underdeveloped countries. Finally, in a reaction to this concentration on a single factor as the determinant of international price movements, a group of economists, began a systematic investigation of the role of growth in trade and the terms of trade using neoclassical assumption. This study,particularly in its assumptions regarding demand, falls into the tradition of the last group. However, it extends the tradition by treating growth as a continuous process, dependent on saving out of produced income and the growth rate of population in two trading economies. Therefore, in addition to answering the comparative statics questions regarding the trends in the terms of trade, it develops the conditions which guarantee that the two economies will approach a state of unique long-run balanced growth, in which all per capita variables, as well as the terms of trade, stabilize. Moreover, these methods permit some discussion of changes in the patterns of specialization.