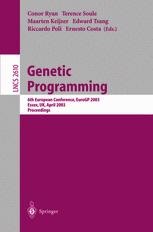 In this volume we present the accepted contributions to the Sixth European Conference on Genetic Programming (EuroGP 2003) which took place at the University of Essex, UK on 14-16 April 2003. EuroGP is now a well-established conference and, without any doubt, the most important international event - voted to Genetic Programming occurring in Europe. The proceedings have all been published by Springer-Verlag in the LNCS series. EuroGP began as an - ternational workshop in Paris, France in 1998 (14–15 April, LNCS 1391). Sub- quently the workshop was held in G¨ oteborg, Sweden in 1999 (26–27 May, LNCS 1598) and then EuroGP became an annual conference: in 2000 in Edinburgh, UK (15–16 April, LNCS 1802), in 2001 in Lake Como, Italy (18–19 April, LNCS 2038) and in 2002 in Kinsale, Ireland (3–5 April, LNCS 2278). From the outset, there have always been specialized workshops, co-located with EuroGP, focusing on applications of evolutionary algorithms (LNCS 1468, 1596, 1803, 2037, and 2279). This year was no exception and EvoWorkshops 2003, incorporating Evo- BIO, EvoCOP, EvoIASP, EvoMUSART, EvoSTIM and EvoROB, took place at the University of Essex (LNCS 2611). Genetic Programming (GP) is that part of Evolutionary Computation which solves particular complex problems or tasks by evolving and adapting popu- tions of computer programs, using Darwinian evolution and Mendelian genetics as a source of inspiration.