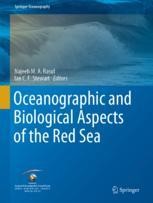 Oceanographic and Biological Aspects of the Red Sea

This book includes invited contributions presenting the latest research on the oceanography and environment of the Red Sea. In addition to covering topics relevant to research in the region and providing insights into marine science for non-experts, it is also of interest to those involved in the management of coastal zones and encourages further research on the Red Sea

Dr. Najeeb M.A. Rasul holds a Master’s degree in Marine Geology, and has a Ph.D. in Geological Oceanography from the University of Wales, UK. He is presently a Technical Advisor at the Saudi Geological Survey (SGS) in Jeddah. For the past 15 years he has been associated with several organizations and has held key research positions at Geological and Geophysical Research Systems in Canada, the Challenger Division for Seafloor Processes at the National Oceanography Centre, Southampton, UK., Environment Canada in Burlington, Canada, and the Center for Marine Geology at the SGS, where he was the Head of the Center from 2003 to 2010. He has conducted research cruises with European Union Research centres, including the Institute of Marine Sciences (ISMAR), Italy and the IOC-UNESCO (TTR programme) and has been a EUROMARGINS and Saudi Scientific Coordinator. He has been involved in several research projects and cruises as chief scientist, and scientific investigator in the Pacific, Indian and Atlantic Oceans, including the Mid-Atlantic Ridge, Strait of Gibraltar, Gulf of Cadiz, Mediterranean Sea, Tyrrhenian Sea, Alboran Sea, Henderson Lake, Lake Erie, Arabian Gulf, Strait of Hormuz, Arabian Sea, and currently the Red Sea for the last 15 years. His research interests have concentrated on the fields of both shallow and deep water sedimentary processes, depositional mechanisms and environmental aspects. These include research on modern underwater sedimentary features and processes involved in their formation, deep sea turbidite systems, sediment dispersal and pathways, sediment plumes, fluxes and deposition, contaminants and chemical pathways for pollution and their environmental impact in both time and space, as well as marine mineral resources. He has also worked on the formation and exploration of oil and gas in deltas and offshore regions.
Dr. Ian C.F. Stewart received a Ph.D. in seismology from the University of Adelaide, South Australia. From 1974 until 1982 he was with the Department of Earth Sciences at Memorial University of Newfoundland, Canada, where he taught geophysics. He then carried out research and worked on potential fields for Saudi Aramco in the Exploration Department in Dhahran, Saudi Arabia until 1996, and later for Normandy Exploration in Australia for 2 years in gold exploration. He was the Geophysical Technical Adviser to the Saudi Geological Survey, Jeddah, between 2003 and 2013. He is an independent geophysical consultant based in Adelaide, applying proprietary methods for processing gravity and magnetic data for numerous mining and oil companies in Australia, the Middle East, Africa and North and South America.