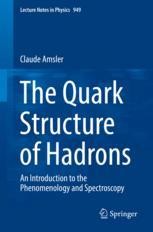 The Quark Structure of Hadrons

An Introduction to the Phenomenology and Spectroscopy

Novel forms of matter, such as states made of gluons (glueballs), multiquark mesons or baryons and hybrid mesons are predicted by low energy QCD, for which several candidates have recently been identified. Searching for such exotic states of matter and studying their production and decay properties in detail has become a flourishing field at the experimental facilities now available or being built - e.g. BESIII in Beijing, BELLE II at SuperKEKB, GlueX at Jefferson Lab, PANDA at FAIR, J-PARC and in the upgraded LHC experiments, in particular LHCb. A modern primer in the field is required so as to both revive and update the teaching of a new generation of researchers in the field of QCD.

These lectures on hadron spectroscopy are intended for Master and PhD students and have been originally developed for a course delivered at the Stefan Meyer Institute of the Austrian Academy of Sciences. They are phenomenologically oriented and intended as complementary material for basic courses in particle and nuclear physics. The book describes the spectra of light and heavy mesons and baryons, and introduces the fundamental properties based on symmetries. Further, it derives multiplet structures, mixing angle, decay coupling constants, magnetic moments of baryons, and predictions for multiquark states and compares these with suitable experimental data. Basic methods of calculating decay angular distributions and determining masses and widths of resonances are also presented.

The appendices provide students and newcomers to the field with the necessary background information, and include a set of problems and solutions.

Claude Amsler studied experimental physics at ETH-Zürich and obtained his PhD in 1975 with the first particle physics experiment performed at the Paul Scherrer Institute (PSI), a measurement of pion scattering on polarized protons.  He then joined Queen Mary College (London) as a Research Associate and was delegated to TRIUMF in Vancouver to work on nucleon-nucleon scattering experiments. In 1978 he moved to Brookhaven National Laboratory as a Research Assistant Professor from the University of New Mexico to work on antiproton experiments. In 1979 he obtained a CERN Fellowship. After a brief leave at the University of Munich he joined in 1982 the Physik-Institut of the University of Zürich, where he became Full Professor in 1999.

Claude Amsler contributed to several projects at CERN such as meson spectroscopy in low energy proton-antiproton annihilation - the ASTERIX and CRYSTAL BARREL experiments  (which led to the discovery of several new light mesons), in the first production of cold antihydrogen with ATHENA, and in the observation of electromagnetically bound kaon-pion pairs (DIRAC experiment). He also contributed to the development of liquid argon detectors for dark matter searches (ArDM and ASPERA-DARWIN projects) and to a measurement of the neutrino magnetic moment at the Bugey nuclear power plant (MUNU-experiment).

He joined CMS at the Large Hadron Collider in 1995. His group initiated a search for heavy baryons which led to the discovery in 2012 of a new heavy baryon containing the b-quark. He is involved in detector developments for the AEgIS experiment at CERN, which plans to measure the gravitational acceleration of antihydrogen, and in ASACUSA, which is measuring the hyperfine splitting of antihydrogen. He is a member of the Particle Data Group, dealing in particular with mesons.

Between 1996 and 2003 he led the Forum of High Energy Physicists in Switzerland and coordinated the foundation of CHIPP (Swiss Institute of Particle Physics). He represented Switzerland in the European nuclear physics board NuPECC between 2003 and 2008. He was a member of the ASPERA Evaluation Committees, and a member of the Swiss National Research Council (SNSF) until 2008. Since then he is advising SNSF on research projects, is a member of review panels of the German Research Foundation (DFG) and is a member of the advisory board of the CERN courier.