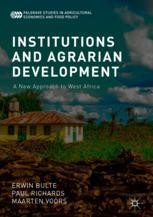 A New Approach to West Africa

This book argues that development strategies have thus far failed in Western Africa because the many challenges afflicting the area have yet to be explored and understood from the perspective of institutional resources. With a particular focus on three countries on the bend of the Upper West African coast – Guinea, Liberia and Sierra Leone – this book offers a theory to account for the nature of these institutional elements, to test deductions against evidence, and finally to propose a reset for rural development policy to make fuller use of local institutional resources. Based on quantitative analysis and eight years of multidisciplinary field research, this volume features several large-scale RCTs in the domain of rural development, local governance, and nature conservation. The authors address one of the biggest topics in agricultural and development economics today: the structural transformation of poor, agrarian economies, and they do so through the important and unique lens of institutions.

Paul Richards is Professor Emeritus of Technology and Agrarian Development at Wageningen University, the Netherlands, and an honorary professor at Njala University, Sierra Leone. He has carried out anthropological and agricultural research in West African countries at various periods over 45 years.  His many papers and books include analyses of agrarian factors in civil wars and inter-communal conflicts in the West African region.

Maarten Voors is Assistant Professor of Development Economics at Wageningen University, the Netherlands. His research focuses on institutions, (post-conflict) development and behavior, and his research has appeared in The American Economic Review, Management Science and African Affairs, among others.