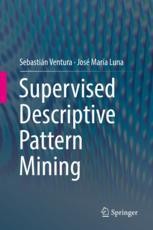 A major feature of this book is that it provides a general overview (formal definitions and algorithms) of all the tasks included under the term supervised descriptive pattern mining. It considers the analysis of different algorithms either based on heuristics or based on exhaustive search methodologies for any of these tasks. This book also illustrates how important these techniques are in different fields, a set of real-world applications are described.

Last but not least, some related tasks are also considered and analyzed. The final aim of this book is to provide a general review of the supervised descriptive pattern mining field, describing its tasks, its algorithms, its applications, and related tasks (those that share some common features).

This book  targets developers, engineers and computer scientists aiming to apply classic and heuristic-based algorithms to solve different kinds of pattern mining problems and apply them to real issues. Students and researchers working in this field, can use this comprehensive book (which includes its methods and tools) as a secondary textbook.