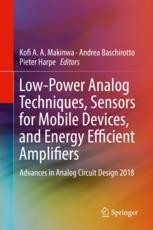 This book is based on the 18 invited tutorials presented during the 27th workshop on Advances in Analog Circuit Design.  Expert designers from both industry and academia present readers with information about a variety of topics at the frontiers of analog circuit design, including the design of analog circuits in power-constrained applications, CMOS-compatible sensors for mobile devices and energy-efficient amplifiers and drivers. For anyone involved in the design of analog circuits, this book will serve as a valuable guide to the current state-of-the-art.

Provides a state-of-the-art reference in analog circuit design, written by experts from industry and academia;

Presents material in a tutorial-based format;

Covers the design of analog circuits in power-constrained applications, CMOS-compatible sensors for mobile devices and energy-efficient amplifiers and drivers.

Kofi Makinwa holds degrees from Obafemi Awolowo University, Ile-Ife (B.Sc., M.Sc.), Philips International Institute, Eindhoven (M.E.E.), and Delft University of Technology, Delft (Ph.D.). From 1989 to 1999, he was a research scientist at Philips Research Laboratories, where he designed sensor systems for interactive displays, and analog front-ends for optical and magnetic recording systems. In 1999 he joined Delft University of Technology, where he is currently an Antoni van Leeuwenhoek Professor of the Faculty of Electrical Engineering, Mathematics and Computer Engineering and Chair of the Electronic Instrumentation Laboratory.

Dr. Makinwa holds 18 patents, and has authored or co-authored 4 books and over 170 technical papers. He is on the program committee of the European Solid-State Circuits Conference (ESSCIRC) and the workshop on Advances in Analog Circuit Design (AACD). He has also served on the program committees of the International Solid-State Circuits Conference (ISSCC), the International Conference on Solid-State Sensors, Actuators and Microsystems (Transducers) and the IEEE Sensors Conference. He was a distinguished lecturer of the IEEE Solid-State Circuits Society (2008 to 2011) and a guest editor of the Journal of Solid-State Circuits (JSSC). He has given invited talks and tutorials at several international conferences including ISSCC, ESSCIRC, ASSCC and the VLSI symposium. At the 60th anniversary of ISSCC, he was recognized as one of its top ten contributing authors.
For his Ph.D. research, Dr. Makinwa was awarded the title of 'Simon Stevin Gezel' by the Dutch Technology Foundation (STW). In 2005, he received a VENI grant from the Dutch Scientific Foundation (NWO). He is a co-recipient of several best paper awards: from the JSSC (2), ISSCC (4), ESSCIRC (2) and Transducers (1). He is an IEEE Fellow, an alumnus of the Young Academy of the Royal Netherlands Academy of Arts and Sciences (KNAW) and an elected member of the AdCom of the IEEE Solid-State Circuits Society.

Pieter Harpe received the M.Sc. and Ph.D. degrees from the Eindhoven University of Technology, The Netherlands. In 2008, he started as researcher at Holst Centre / imec, The Netherlands. Since then, he has been working on ultra low-power wireless transceivers, with a main focus on ADC research and design. In April 2011, he joined Eindhoven University of Technology as assistant professor on low-power mixed-signal circuits. Since 2012, he is co-organiser of the yearly workshop on Advances in Analog Circuit Design (AACD). In 2013, he became member of the Technical Program Committees of ISSCC and ESSCIRC. In 2013, he received a 250.000euro `VENI' grant from the Dutch Technology Foundation STW for research on multi-functional ADCs.
Show all