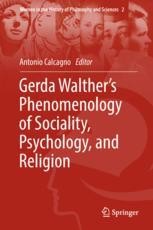 This book explores the philosophical writings of Gerda Walther (1897–1977). It features essays that

and philosophy. In addition, the volume contains an English translation of part of her

The essays consider the interdisciplinary implications of Gerda Walther’s ideas. A student

of Edmund Husserl, Edith Stein, and Alexander Pfänder, she wrote

foundational studies on the ego, community, mysticism and religion, and consciousness.

Her discussions of empathy, identification, the ego and ego-consciousness,

relevant not only to phenomenology and philosophy but also to scholars of religion, women’s

movement. However, as a woman, she could not habilitate at a German

university and was, therefore, denied a position. Her complete works have yet to be

published. This ground-breaking volume not only helps readers discover a vital voice but it

Antonio Calcagno is Professor of Philosophy at King’s University College, London, Canada. He is the author of Giordano Bruno and the Logic of Coincidence (1998), Badiou and Derrida: Politics, Events and Their Time (2007), The Philosophy of Edith Stein (2007), Lived Experience from the Inside Out: Social and Political Philosophy in Edith Stein (2014). He is the editor of Edith Stein: Women, Social-Political Philosophy, Theology, Metaphysics and Public History: New Approaches and Applications (Dordrecht: Springer, 2015).

“I recommend this book as an introduction for the English-reading academic philosopher to Gerda Walther’s thought. … I look forward to reading much more work on Gerda Walther.” (Charlene Elsby, Symposium, c-scp.org, July 07, 2019)