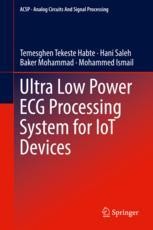 TTemesghen Tekeste received the B.S. degree in electrical engineering from Asmara University, Eritrea, in 2007, and the M.S. degree in microsystems engineering from the Masdar Institute of Science and Technology, Abu Dhabi, in 2012, with a focus on low-power, mixed signal integrated circuit design that involved schematic design, simulation, layout, and verification of an ultra-low power clock generator for heart rate sensor IC. He received his Ph.D. from Khalifa University, Abu Dhabi, United Arab Emirates in 2018, where he researched on ultra-low power digital circuit design for biomedical application.. In 2006, he joined the Eritrea Institute of Technology, Asmara, as a Teaching Assistant and a Lab Instructor. He holds two issued U.S. patents, and has authored journal and conference papers. His research interest includes DSP hardware design, computer architecture, ASIC chip design, and FPGA design.

Hani Saleh is an associate professor of electronic engineering at Khalifa University since Jan, 2012. He is an a co-founder and an active member in KSRC (Khalifa University Research Center) where he leads a project for the development of wearable blood glucose monitor SOC and a mobile surveillance SOC and safe exercise monitoring device. Hani published over 100 articles in peer-reviewed journals and conferences, he has 15 issued US patents and 5 pending patent applications. Hani has a close to 19 years of industrial experience in ASIC chip design, microprocessor design, DSP core design, graphics core design and embedded system design. His experience spans DSP core design, microprocessor peripherals design, microprocessors and graphics core deign. Prior to joining Khalifa University he worked as a Senior Chip Designer (Technical Lead) at Apple incorporation; where he worked on the design and implementation of Apple next generation graphics cores for its mobile products (iPad, iPhone, …etc.), prior to joining Apple, he worked for several leading semiconductor companies including Intel (ATOM mobile microprocessor design), AMD (Bobcat mobile microprocessor design), Qualcomm (QDSP DSP core design for mobile SOC’s), Synopsys (a key member of Synopsys turnkey design group where he taped out many ASICs and designed the I2C DW IP included in Synopys DesignWare library), Fujitsu (SPARC compatible high performance microprocessor design) and Motorola Australia (M210 low power microprocessor synthesizable core design).

Baker authored/co-authored over 30 referred journals and 80 conference proceedings, 3 books, 18 US patents, multiple invited seminars/panelist, and the presenter of 3 conference tutorials including one tutorial on Energy harvesting and Power management for WSN at the 2015 (ISCAS).  Baker is associate editor for microelectronics journal, Elsevier and serves in many technical committee for IEEE conferences and reviewers for journals including TVLSI, IEEE Circuits and Systems.

Mohammed Ismail received the B.S. and M.S. degrees from Cairo University, Cairo, Egypt, and the Ph.D. degree from the University of Manitoba, Winnipeg, MB, Canada, in 1983, all in electrical engineering. He served as a Faculty Member with the ElectroScience Laboratory, The Ohio State University (OSU). He was a Research Chair with the Swedish Royal Institute of Technology, where he founded the Radio and Mixed Signal Integrated Systems Research Group. He had visiting appointments at Aalto University, Finland, NTH, Norway, the University of Oslo, Norway, Twente University, The Netherlands, and the Tokyo Institute of Technology, Japan. He joined the Khalifa University of Science, Technology, and Research, Abu Dhabi, UAE, in 2011, where he held the ATIC (now Mubadala Technology) Professor Chair and the Founding Chair of the ECE Department. He joined Wayne State University, Detroit, MI, USA, as a Professor and the Chair of ECE. He maintained an appointment with Khalifa University as an Adjunct Professor. He is currently the Founding Director of the Khalifa Semiconductor Research Center and the Co-Director of the Mubadala-SRC Center of Excellence on Energy Efficient Electronic systems targeting self-powered chip sets for wireless sensing and monitoring, biochips, and power management solutions. He is also a Prolific Author and an Entrepreneur in the field of chip design and test, and spent over 25 years in academia and industry in U.S. and Europe. He is also the Founder of the Analog VLSI Laboratory, OSU, one of the foremost research entities in the field of analog, mixed signal, and RF integrated circuits, and served as its Director. He served as a Corporate Consultant to over 30 companies and a Co-Founder of Micrys Inc., Columbus, OH, UAS, Spirea AB, Stockholm, Sweden, Firstpass Technologies Inc., Dublin, OH, USA, and ANACAD-Egypt (now part of Mentor Graphics, a Siemens company). He advised the work of over 55 Ph.D. students and over 100 M.S. students. He has authored or co-authored over 20 books and over 170 journal publications, 300 conference papers and holds 13 U.S. patents issued and several pending. His current research focuses on self-healing design techniques for CMOS RF and millimeter-wave ICs in deep nanometer nodes, energy harvesting, power management, wearable self-powered biochips, hardware security, and SoC platforms for the Internet of Things. He received the U.S. Presidential Young Investigator Award, several best paper awards, the Ohio State Lumley Research Award in 1992, 1997, 2002, and 2007, and the U.S. Semiconductor Research Corporations Inventor Recognition Award twice. He is the Founding Editor of the Springer Journal of Analog Integrated Circuits and Signal Processing and serves as the Journal’s Editor-in-Chief. He has served the IEEE in many editorial and administrative capacities. He is the Founder of the IEEE International Conference on Electronics, Circuits and Systems, the flagship Region 8 Conference of the IEEE Circuits and Systems Society, and a Co-Founder of the IEEE International Symposium on Quality Electronic Design.