Law
Law and Religion in a Global Context
Free Preview 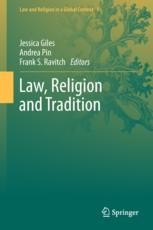 This book explores different theories of law, religion, and tradition, from both a secular and a religious perspective. It reflects on how tradition and change can affect religious and secular legal reasoning, identifying the patterns of legal evolution within religious and secular traditions.
It is often taken for granted that, even in law, change corresponds and correlates to progress – that things ought to be changed and they will necessarily get better. There is no doubt that legal changes over the centuries have made it possible to enhance the protection of individual rights and to somewhat contain the possibility of tyranny and despotism. But progress is not everything in law: stability and certainty lie at the core of the rule of law. Similarly, religions and religious laws could not survive without traditions; and yet, they still evolve, and their evolution is often intermingled with secular law.
The book asks (and in some ways answers) the questions: What is the role of tradition within religions and religious laws? What is the impact of religious traditions on secular laws, and vice-versa? How are the elements of tradition to be identified? Are they the same within the secular and the religious realm? Do secular law and religious law follow comparable patterns of change? Do their levels of resilience differ significantly? How does the history of religion and law affect changes within religious traditions and legal systems?
The overall focus of the book addresses the extent to which tradition plays a role in shaping and re-shaping secular and religious laws, as well as their mutual boundaries.

Jessica Giles is a law lecturer at the Open University. She graduated in Law at Durham University and completed her master’s in International Human Rights Law and European Union Law at Bristol University. She studied theology at the Open Theological College and theology of law at Spurgeon’s College. She qualified as a Solicitor in 1991 and transferred to the Bar in 2016. She has worked as a law reporter for the Incorporated Council of Law Reporting for England and Wales in the Chancery, Queen’s Bench and Administrative Divisions of the High Court as well as in the Court of Justice of the European Union. She gained her Fellowship of the Higher Education Academy in 2015 and Senior Fellowship of the Higher Education Academy in 2016.

Andrea Pin (JD, University of Padua; PhD, University of Turin) is Associate Professor at the University of Padua, where he has taught Comparative Public Law, Economic & Social Rights, Islamic Law, Human Rights in Comparative Perspective, and Italian Constitutional Law. A former judicial clerk to the Italian Constitutional Court, he has taught at the U.S. Universities of Emory, where he is Senior Fellow at the Center for the Study of Law and Religion, and of Notre Dame, where he was also Visiting Fellow at the Kellogg Institute for International Studies in 2014. He is author of four books, including "The Legal Treatment of Muslim Minorities in Italy" (Ashgate 2016); his scholarly articles have appeared in U.S., British, Italian, Spanish, and French journals.

Frank S. Ravitch is professor of Law and Walter H. Stowers Chair in Law in Religion at the Michigan State University College of Law. He also directs the Kyoto Japan Program. He is the author of Freedom’s Edge: Religious Freedom, Sexual Freedom, and the Future of America (Cambridge University Press, 2016) (Nominated for a Prose Award); Marketing Creation: The Law and Intelligent Design (Cambridge University Press 2012), Masters of Illusion: The Supreme Court and the Religion Clauses (NYU Press 2007); Law and Religion: Cases, Materials, and Readings (West 2004) (2nd Ed. 2008) (3rd Ed. 2015 with Larry Cata Backer), School Prayer and Discrimination: The Civil Rights of Religious Minorities and Dissenters (Northeastern University Press, 1999 & paperback edition 2001). He is the co-author, with the late Boris Bittker and with Scott Idleman, of the first comprehensive treatise on law and religion in more than one hundred years, Religion and the State in American Law (Cambridge University Press 2015) (this project was supported by a generous grant from the Lilly Endowment). He is also the co-author of Employment Discrimination Law (Prentice Hall, 2005) (with Pamela Sumners and Janis McDonald). Professor Ravitch’s articles, which have appeared in a number of highly regarded journals, have primarily focused on law and religion in the U.S. and Japan, but he has also written about civil rights law and disability discrimination. He has also authored a number of amicus briefs to the U.S. Supreme Court and has given numerous academic presentations nationally and internationally. In 2001, he was named a Fulbright scholar and served on the law faculty at Doshisha University (Japan).