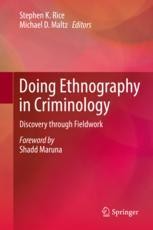 This innovative book examines the use of ethnography and fieldwork in Criminology and Criminal Justice Research. Using a combination of case studies, as well as “behind the scenes” contributions, it provides an comprehensive look at both the insights gained from ethnographic research, as well as the choices researchers make in conducting that work.

This work will be of interest to researchers in criminology and criminal justice, particularly with a qualitative perspective, as well as related fields such as sociology, anthropology, and demography. It will also be of interest to students studying research methods and design.
Show all
About the authors

Stephen K. Rice is Associate Professor of Criminal Justice at Seattle University. He studies cooperation and defiance in individuals’ interactions with the justice system. Toward this end, his work has focused on emotions and crime, radicalization, procedural and restorative justice, racial / ethnic profiling (African Americans, Latinos, Muslim Americans), police / community relations (e.g., the police officer as “guardian”), final statements of the condemned, and social media and criminal justice.  His publications have appeared in outlets to include Criminology, Justice Quarterly, Deviant Behavior, Policing, the Journal of Quantitative Criminology, and the Harvard Executive Session on Policing and Public Safety.  He is also co-editor of Envisioning Criminology: Researchers on Research as a Process of Discovery (Springer) (with Michael D. Maltz) and Race, Ethnicity, and Policing (NYU Press) (with Michael D. White). His scholarship has been featured in public outlets to include The Final Report of The President’s Task Force on 21st Century Policing, The Washington Post, The Atlantic, and The New York Times. He received his Ph.D. from the University of Florida.
Michael D. Maltz is professor emeritus of criminal justice and of information and decision sciences at the University of Illinois at Chicago and senior research scientist and adjunct professor of sociology at the Criminal Justice Research Center at Ohio State University. A past editor of the Journal of Quantitative Criminology, he was on the staff of the National Institute of Justice (1969-72) and was a visiting fellow at the Bureau of Justice Statistics (1995-2000). In 1996, he held a Fulbright Scholarship at El Colegio de Michoacán in Mexico. His primary research interests have been on the assessing the validity of, and developing measures to extract useful inferences from, crime data. His 1984 book, Recidivism (Academic Press), was awarded the Wilkins Award for the outstanding book in criminology and the Lanchester Prize of the Operations Research Society of America. He is coauthor of Mapping Crime in Its Community Setting (Springer), (with Andrew Gordon and Warren Friedman), author of Bridging Gaps in Police Crime Data (US Government Printing Office), and co-editor of Envisioning Criminology: Researchers on Research as a Process of Discovery (Springer) (with Stephen K. Rice). He holds a Ph.D. in electrical engineering from Stanford University.