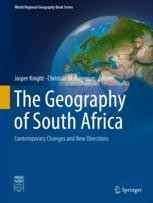 The Geography of South Africa

This edited collection examines contemporary directions in geographical research on South Africa. It encompasses a cross section of selected themes of critical importance not only to the discipline of Geography in South Africa, but also of relevance to other areas of the Global South.
All chapters are original contributions, providing a state of the art research baseline on key themes in physical, human and environmental geography, and in understanding the changing geographical landscapes of modern South Africa.
These contributions set the scene for an understanding of the relationships between modern South Africa and the wider contemporary world, including issues of sustainable development and growth in the Global South.

Jasper Knight is Professor of Physical Geography at the University of the Witwatersrand, Johannesburg, South Africa. He is a physical geographer with research interests in the dynamics of geomorphic and sedimentary systems, in particular in glacial, mountain, river and coastal environments, and in a global context. He has published over 100 articles in peer reviewed international journals. Recent edited books include Landscapes and Landforms of South Africa (2015, Springer, with S. Grab) and Quaternary Environments of South Africa (2016, Cambridge University Press, with S. Grab).

Christian M. Rogerson is Research Professor at the School of Tourism and Hospitality, College of Business and Economics, University of Johannesburg, South Africa. By training he is an economic geographer and obtained his PhD at Queen’s University, Kingston, Canada following a MSc at University of Witwatersrand, Johannesburg and BSc Hons at University College, London, England.  His research interests include a range of issues including informality in the global South, local economic development policies and practices, small enterprise development, and the tourism-development nexus. During the past decade his major research contributions have centred on urban tourism, tourism and poverty alleviation, pro-poor and inclusive tourism, and the informal economy of travel and tourism. Southern Africa has been the major geographical focus of his research. Since 1974 he has authored over 400 published research articles, 4 books and co-edited 12 books. Among his co-edited books are the following: South Africa's Informal Economy (with E. Preston-Whyte), Oxford University Press, Cape Town, 1991; Geography in a Changing South Africa: Progress and Prospects (with J.J. McCarthy), Oxford University Press, Cape Town, 1992; Finance, Institutions and Industrial Change (with E. Schamp and G.J.R. Linge), Walter de Gruyter, Berlin, 1993; Geography and Economy in South Africa and Its Neighbours (with A. Lemon), Ashgate, London, 2002; Clothing and Footwear in African Industrialisation (with D. McCormick), Africa Institute of South Africa, Pretoria, 2004; Tourism and Development Issues in Contemporary South Africa (with G. Visser), Africa Institute of South Africa, Pretoria, 2004; Local Economic Development in the Developing World: The Experience of Southern Africa (with E. Nel), Transaction Press, London, 2005; Urban Tourism in the Developing World: The South African Experience (with G. Visser), Transaction Press, London, 2007; Tourism and the Millennium Development Goals (with J. Saarinen and H. Manwa), Routledge, London, 2013; and, Tourism Planning and Development: Contemporary Cases and Emerging Issues (with J. Saarinen and C. Michael Hall), Routledge, Abingdon, 2018.