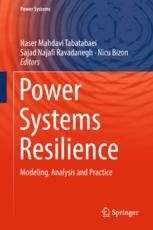 This book presents intuitive explanations of the principles and applications of power system resiliency, as well as a number of straightforward and practical methods for the impact analysis of risk events on power system operations. It also describes the challenges of modelling, distribution networks, optimal scheduling, multi-stage planning, deliberate attacks, cyber-physical systems and SCADA-based smart grids, and how to overcome these challenges. Further, it highlights the resiliency issues using various methods, including strengthening the system against high impact events with low frequency and the fast recovery of the system properties. A large number of specialists have collaborated to provide innovative solutions and research in power systems resiliency. They discuss the fundamentals and contemporary materials of power systems resiliency, theoretical and practical issues, as well as current issues and methods for controlling the risk attacks and other threats to AC power systems. The book includes theoretical research, significant results, case studies, and practical implementation processes to offer insights into electric power and engineering and energy systems. Showing how systems should respond in case of malicious attacks, and helping readers to decide on the best approaches, this book is essential reading for electrical engineers, researchers and specialists. The book is also useful as a reference for undergraduate and graduate students studying the resiliency and reliability of power systems.

Naser Mahdavi Tabatabaei was born in Tehran, Iran in 1967. He received B.Sc. and the M.Sc. degrees from the University of Tabriz (Tabriz, Iran) and his Ph.D. degree from Iran University of Science and Technology (Tehran, Iran), all in Power Electrical Engineering, in 1989, 1992, and 1997, respectively. Currently, he is a Professor of International Organization at IOTPE. He is also an academic member of Power Electrical Engineering at Seraj Higher Education Institute (Tabriz, Iran) and teaches power system analysis, power system operation, and reactive power control. He is the General Chair and Secretary of the ICTPE conference, Editor-in-Chief of IJTPE and Chairman of IETPE, all supported by IOTPE. He has authored and co-authored 7 books and book chapters in the field of electrical engineering area and more than 160 papers in international journals and conference proceedings. His research interests are in the area of power system analysis and control, power quality, energy management systems, microgrids and smart grids. He is a member of the Iranian Association of Electrical and Electronic Engineers (IAEEE). Sajad Najafi Ravadanegh was born in Iran in 1976. He received his B.Sc. degree from the University of Tabriz (Tabriz, Iran), and his M.Sc. and Ph.D. degrees from the Amirkabir University of Technology, Tehran, Iran, in 2001, 2003, and 2009, respectively, all in Electrical Engineering. He is currently an Associate Professor at the Department of Electrical Engineering, Azarbaijan Shahid Madani University, and is responsible for the Smart Distribution Grid Research Lab. He is also a senior consultant and project manager in power systems studies. His current research interests include smart distribution grids and optimal microgrid operation and planning, power system resiliency, controlled islanding, optimization, nonlinear dynamic, and energy systems. He has authored and coauthored over 100 technical papers. Nicu Bizon received a degree in Electronic Engineering from the University “Polytechnic” of Bucharest, Romania, in 1986, and a Ph.D. degree in Automatic Systems and Control from the same university in 1996. He first worked in in hardware design at Dacia Renault SA, Romania. Currently, he is Professor at the University of Pitesti, Romania, having been the Dean of the Faculty of Electronics (2012–2017), Communication and Computers; Head of University Research Department (2004–2008) and Executive Director of the Research Centre “Modeling and simulation processes and systems” (2008–2012). He was the manager of four research projects in the field of Green and Hydrogen Energy, and a team member in ten other projects in the same research field.