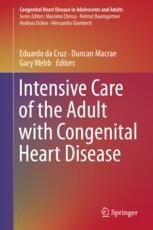 Intensive Care of the Adult with Congenital Heart Disease

Dedicated to the critical management of acutely ill adults with congenital heart disease, this comprehensive book discusses the many challenges faced in the management of these patients, who require intensive inter- and trans-disciplinary care. It provides the first universal review of the practical management of patients with these complex conditions, who survive into adulthood with congenital cardiac malformations and are often affected by other morbidities. For this reason, it reflects a consistent interaction and collaboration between several disciplines: pediatric and adult cardiology, cardiac surgery, pediatric and adult cardiac intensive care, anesthesia, intensive care nursing, nutrition, psychology and many other specialties. It offers concise and pragmatic recommendations, and provides basic and advanced concepts that allow caregivers to anticipate, prevent and effectively treat such pathologies. The book also includes chapters focusing on cardiac-database and risk-factor assessment, organizational and operational topics, advanced mechanical circulatory assistance and pharmacology.

Whilst bringing together top international experts who are leading reference programs around the globe, this book is an indispensable teaching tool for clinicians and caregivers involved in the management of critically ill adults with congenital heart disease.

Eduardo da Cruz trained in medicine and in pediatrics at the Universidad de Costa Rica and then in pediatric cardiology and intensive care at the Hôpital Necker-Enfants Malades, Université René Descartes-Paris V. He was an attending physician in France, the UK, Portugal and Switzerland until 2007, when he joined Children’s Hospital Colorado in the USA. He is a Tenured Professor of Pediatrics, the Associate Medical Director of the Heart Institute and Head of the Pediatric Cardiac Critical Care Program and Inpatient Services at that institution. He has extensive experience in the management of patients with complex congenital or acquired heart disease. He is a reviewer for 25 medical journals, and the editor of five CICU books and has published more than 50 book chapters and dozens of manuscripts. He is the founder of the Working Group on Pediatric Cardiac Intensive Care of the Association for the European Pediatric and Congenital Cardiology, founder and Chair of the Section of Pediatric and Congenital Cardiac Intensive Care and Mechanical Circulatory Assistance of the European Society of Pediatric and Neonatal Intensive Care, and an active member of multiple other international Societies. He serves as an Expert Reviewer for the European Commission and is the President of Surgeons of Hope Foundation.

Duncan Macrae is a pediatric intensivist at the Royal Brompton hospital, London, U.K.  and also holds an academic appointment at Imperial College, London. He has worked in critical care for over 30 years, supporting the evolution  of specialist congenital cardiac critical care. Dr. Macrae has made major contributions through research and teaching in areas such as ECMO, inhaled nitric oxide therapy and glycemic control.  He is a member of the editorial boards of several major journals including Pediatric Critical Care Medicine,  Intensive Care Medicine and the World journal for Pediatric and Congenital Heart Surgery. He is a former president of the Pediatric Cardiac Intensive Care Society.

Gary D. Webb, M.D. is a Professor of Pediatrics and Internal Medicine at the University of Cincinnati College of Medicine and, until May 2016, the Director of the Adult Congenital Heart Program at Cincinnati Children's Hospital Heart Institute. After receiving a BSC and MDCM from McGill University in Montréal Québec, he went on to intern at the Royal Victoria Hospital in Montréal, and then to training in internal medicine and cardiology at the University of Toronto. After 8 years as chief of cardiology at the Wellesley Hospital in Toronto, he moved back to Toronto General Hospital. Beginning in 1980, he was codirector and then director of the Toronto Congenital Cardiac Center for Adults. For several years, he directed the adult cardiology training program at the University of Toronto. He is a Fellow of the Royal College of Physicians and Surgeons of Canada in both internal medicine and cardiology. He is a Fellow of the American College of Cardiology, and a life member of the European Society of Cardiology. In 2004, he relocated to Philadelphia, serving as director of the Philadelphia Adult Congenital Heart Center at the University of Pennsylvania. In 2009, he took up his position at Cincinnati Children's Hospital.

“Pediatricians, surgeons, and intensivists are an appropriate audience. This is a worthy introduction for pediatricians with the needed resources. This book also will help adult providers with limited experience in pediatric congenital heart disease facing ramifications of this problem in surviving adults. … This is an important standalone reference that is part of a series of books describing management of congenital heart disease in adolescents and adults.” (David J. Dries, Doody's Book Reviews, August 23, 2019)